So last night I had the Sam Adams Five Crown Imperial Stout from their Longshot series. Tonight I thought  would try the Sam Adams (Imperial Series) Imperial Stout and compare the two. They turned out to be two very different beers right from the start. Both were jet black, as to be expected from an imperial stout,but they poured very differently. The Five Crown was thicker and had an, unexpected, big head. The Imperial Series Stout is a bit thinner in both pour and mouthfeel but had the expected thin lacy head I’ve come to expect from and imperial. The Five Crown had a strong caramel nose in contrast to the fruity, blackberry nose on the Imperial Series. Flavor wise the two were dramatically different. The Five Crown had a creamy flavor balanced with a few burnt coffee notes. The Imperial Series had much stronger burnt flavors but ended with a nice coffee. Both grew in complexity with warmth. Side by side both are good beers but I think the Five crown comes out on top. It’s flavors were more subtle and complex from start to finish. It’s too bad only two come in the pack. 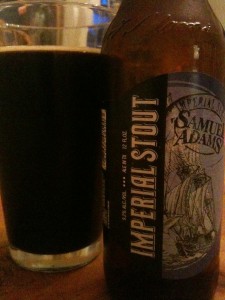 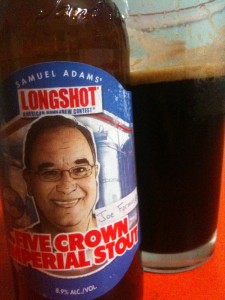