I found Appalachian Brewing Company (ABC) completely by accident. My wife was Instagraming a photograph during a driving tour of the Gettysburg Battlefield and noticed that the Appalachian Brewpub popped up as an option on her geotagging. We were hungry so off we went in search of the pub.

Appalachian Brewing in Gettysburg is one of five breweries and brewpubs located around the area, the others are in Harrisburg, Collegeville, Camp Hill, and Lititz, PA..  The ABC Gettysburg location can be found at one of the turns of the Gettysburg Battlefield driving tour, right next to Robert E. Lee’s battlefield headquarters, so it’s pretty easy to find. We’re always in search of dog friendly places to eat. Appalachian Brewery has shaded outdoor seating and a waitress who loved dogs so we were set. I ordered a very tasty portobello burger and a sampler consisting of a generous eight different beers. 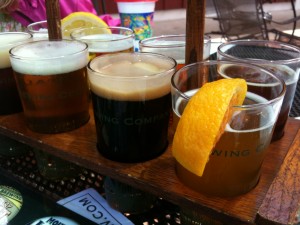 This was a good set of ales ranging from the very light Water Gap Wheat to the Trail Blaze Organic Brown to the jet black Susquehanna Stout. There was also the Mountain Lager thrown into the mix to compliment the ales. The lager was a light, refreshing example, a good summertime beer. I’m always partial to stouts and the Susquehanna was a good coffee flavored version of the style. My wife preferred the Water Gap Wheat though we both thought the spices were subdued. While I didn’t think any of these beers were stand outs most were good solid beers that I wouldn’t mind having in the fridge. I should add that my kids, who are mad root beer drinkers, thought the Appalachian Brewing root beer was some of the best they had tasted.

Brewery wise there isn’t much to tour at the Gettysburg location. Most of the brewing and bottling is done at the Harrisburg location. There is a nice big room with a 10 barrel system in the basement  including a nice description of the brewing process. Nothing fancy here but it does the job. Fermenting on the day I went was a rye IPA and a wheat IPA. 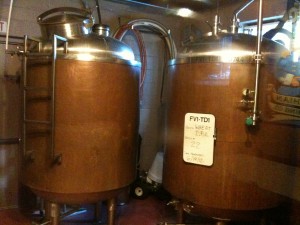 If you start the Gettysburg Battlefield car tour in the morning, The Appalachian Brewing Company is located right about the spot you would need a lunch break. It’s worth stopping in for both the food and the beer.  They say that they plan on staying as local as possible so stopping in may be your only opportunity to sample these beers.