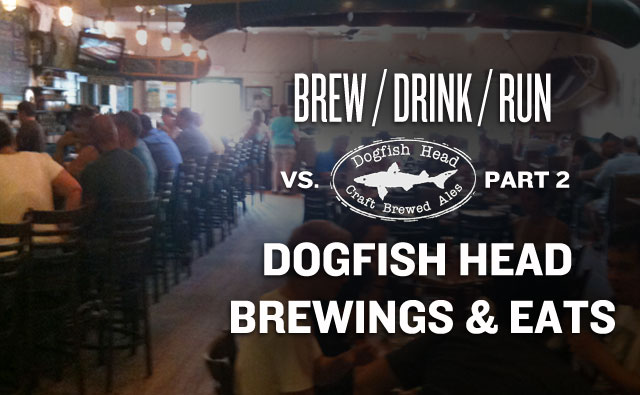 When I started my East Coast brewery tour I had three breweries that were a must see. Troegs Brewery was certainly on that list (check) as was DogFish Head and Allagash (there is a great story there). I wasn’t sure if I was going to make it to both the DogFish Head brewery and the brewpub on this trip. Having just spoken with DogFish Head founder, Sam Calagione, I realized that the Brewpub was the heart and soul of the organization and if I was only going to make it to one, then the pub had to be it.  The restaurant is where all those wonderful experimental beers he spoke about ended up and if Choc Lobster was on the menu then I HAD to give it a try.

My family and I visited DogFish Head Brewings & Eats on a pretty hot day but we had the dog with us and had prepared ourselves for outside dining.  The outdoor seating area is covered and shaded by all sorts of creeping vines so the heat wasn’t much of an issue. Despite a claim of dog friendliness on the website I’m always concerned that the dog will cause problems. The restaurant was, however, true to it word and with a few dog treats made from grains left over from the brewing process and all of us, dog included, settled right in. There were not many people on the deck so Judy (the best waitress ever) let us spread out and made us feel right at home. 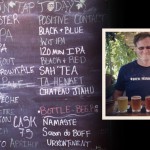 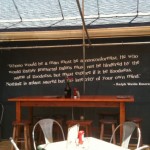 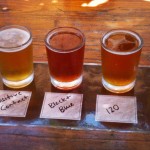 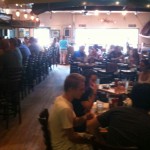 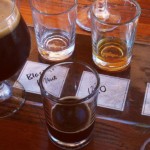 The first thing I did was order a sampler: the Choc Lobster, Wit IPA, Positive Contact, Black and Blue, 120 min IPA and the Black and Red. In his B/D/R interview, Sam Calagione had mentioned the Choc Lobster. It’s a stout, my favorite, made with lobsters and cocoa nibs. Yes it’s a bit gross sounding, but oyster stouts have been around for a long time so there has to be something to the seafood and beer combination. In fact the Choc Lobster has the briny flavor of an oyster stout, but with a touch of lobster flavor followed by the chocolate. I’m sure we won’t see it in the local beer shop but anytime soon but I’d drink it again. With the B-52’s stuck in my head I moved onto the 120 IPA. I ordered the 120 solely because of its reputation. I’m not much of a hop head so I was a bit reluctant to add it to my list but it’s a sampler.  That’s what it’s for, right? The 120 surprised me with how drinkable and evenly hopped it was. It’s wasn’t the teeth numbing experience I expected. I ended up annoyed at myself for not picking up a few bottles when I had the chance. I gave the Positive Contact a try because I feared I would not otherwise be able to find it; but I became an immediate fan and I’m very happy to have scored a few bottles since my visit. My favorite of the group was the Wit IPA, a beer so fresh out of the keg that I had to create an Untappd entry for it. The menu described the Wit IPA as “A Belgian Wit IPA brewed with sorachi ace hops, lemon peels, lemon grass and fresh ground coriander. Brewed at Iron Hill, Wilmington with the help of the brewers from the Delaware Brewers Guild.” The Wit IPA was a great beer, a wit with a slight hoppyness. My wife, not being up for a full sampler, stuck with her favorite DogFish Head beer Theobroma, which she found to be even better on tap.

We started our lunch with some fried pickles served with a 60 Minute IPA truffle mustard dipping sauce. I thought the fried pickles were pretty much perfect but the dipping sauce added something special. For my main course I chose the Dogfish Burger Experience, a burger made with locally grown beef fed with the used barley from the brewing process. My wife ordered the Alpine Idyll, a wood fired pizza topped with white truffle oil, sautéed mushrooms, prosciutto, fresh locally produced goat cheese, arugula, and a balsamic reduction drizzle. My vegetarian kids had pasta from the kids menu but indulged in the house made Beach Beer birch beer, a sweet, summery drink they enjoyed a lot.

Our lunch was awesome and if you ever have a chance to stop in and see where Dogfish Head started, I highly recommend it. The beer was good, of course; but I was really pleased with my food, the service and was thrilled to find such a kid and dog friendly place to eat.

After lunch, things got really interesting lunch. That’s when I met Clay, one of the brewers at DogFish Head. But I’ll tell that story in part three of my DogFish Head saga. Stay tuned!

Dogfish Head Brewings & Eats is located at 320 Rehoboth Avenue in Rehoboth Beach, Delaware.  They are open for lunch and dinner, seven days a week 365 days a year. They can be contacted at 302-226-BREW (2739) and online at http://www.dogfish.com/restaurant/index.htm