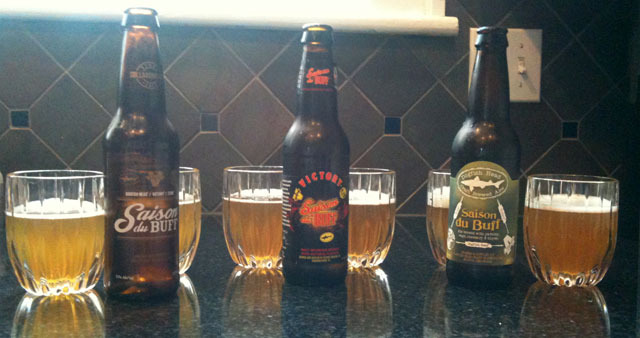 For our third podcast, Keith and I conducted a side-by-side-by-side tasting of Saison du Buff from Dogfish Head, Stone and Victory. We poured from each of the labeled variants and evaluated each for smell, appearance and taste. Brewed with rosemary, sage, parsley and thyme, the same recipe was reproduced at each brewery and released separately.

The Dogfish Head variant was the oldest of our lot at about five months and also the most mellow. A bit cloudy, it still was a nice rich golden color – but not identical to the Stone and Victory pours. The smell was subdued, although the rosemary and thyme were still present. The taste was that of a very well-rounded saison, refreshing and complex but subtle. Definitely the most drinkable of the three.

The Victory du Buff had more significant citrus notes, most recognizable as lemon to grapefruit. Our sample was about three months old. The herbs were stronger and more recognizable and it had a pleasant floral/herbal smell that was more aromatic than Dogfish’s. The citrus made this distinct among the three varieties. Also, the parsley (of all things) was evident in the finish with a slight bitterness. Carbonation was spot on.

The Stone beer was the freshest (around 1 month old) and had an almost overpowering aroma. It was definitely the most interesting of the three due to the severity of the flavors, which matched the strength of the smells. The oil from the rosemary was almost tangible in the mouthfeel. If you’re looking for flavor, this is your beer. Overall very bright and vibrant.

It’s hard to imagine these all used the same ingredients and recipe. While the water source might account for some differential, as would travel and ingredient freshness, we have to chalk up most of the differences here to age. If you’re looking for something extreme, get a bottle and drink it fresh. If you want a more mellow experience, age the bottle around six months.

Keith also contributed to this review. Thanks for sharing your notes!