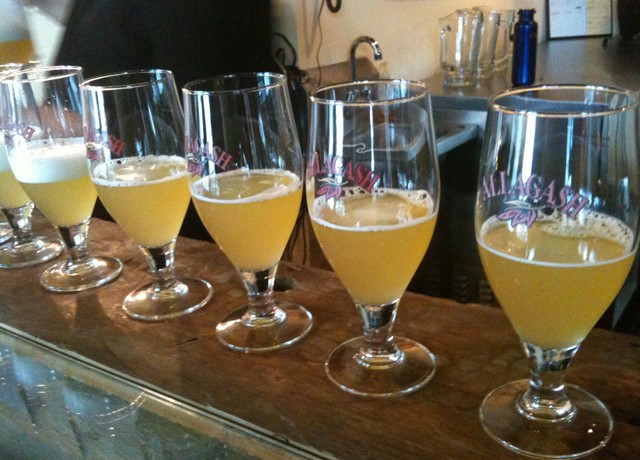 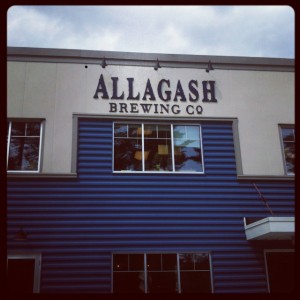 Allagash Brewing Company was, along with DogFish Head and Troegs, the third on my list of  “must visit” breweries. My visit to Allagash almost didn’t happen though. The morning of my reservation I woke to discover I had a dead car battery,  and unfortunately this meant that I couldn’t make it to the Brewery before I had to move on to my next stop. I was, to put it nicely, a little miffed at having missed the opportunity. As the family trip that was my brewcation moved further North I comforted myself with the fact that I could find Allagash beers in Maine that I couldn’t back home. However as we turned the car South we decided to make an impromptu second stop in Portland, providing me with another opportunity to take a tour at Allagash. And I took it.

Allagash is found in an unassuming warehouse type building on the edge of Portland. It’s certainly doesn’t look like the type of place where you would find some of the most exciting beers on the market. Inside however is a different 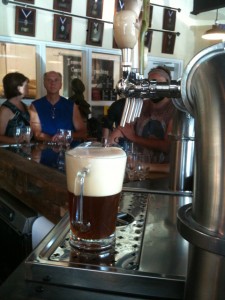 matter. The store and tasting bar are inviting and the walls are covered with the awards Allagash has won over the years.

As is the case with any brewery, I suggest making tour reservations. The tour was booked and the bar full. The tour started with a few tastes. First up in the lineup was the White, Allagash’s capstone beer.  Next up was Tripel, Allagash’s take on a strong ale. This was followed by Curieux, which is the Tripel that has been aged in Jim Beam bourbon barrels. Both of these are part of Allagash’s year round line up. The third and final beer we tasted was Saison Mihm. This saison is a traditional one with a sweet nose and a boozy gin-like finish. It’s brewed with juniper berries, which gives it the gin taste. Allagash produces some beautiful beers and this was no exception.

After the tasting we donned our safety glasses and headed into the back. While most brewery tours are pretty much the same, this tour did have one distinguishing mark: There were bourbon barrels everywhere. We even had the opportunity to see the staff filling those barrels up with Tripel to be converted into Curieux. Another distinguishing aspect of Allagash is the HUGE chilled barrel 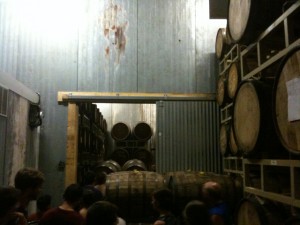 storage room. This room was stacked five high with barrels full of various types of beer, every thing from Curieux to the Coolship series beers. Some of these barrels dated back four years. The barrel warehouse was about to be moved into a new location, as this current one was too small for all the needed barrels. Quite a testament to the popularity of these sophisticated beers.

One part of Allagash’s brewing process that I hoped to see but was omitted from the tour was the coolship room. This is a room where beers are allowed to be inoculated with wild yeast. This process imparts a funky, sour flavor to the beers. Make sure you listen to   the podcast of Keith, Lee and I sampling some of the Coolship Resurgam. 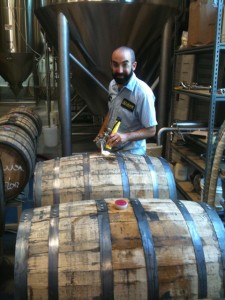 A few facts that came up in the tour that surprised me. White makes up 60% of Allagash’s sales.  The importance of this is that the brewery is allowed to create all the experimental and exciting beers because they have such a solid base. If you like Allagash’s unusual beers make sure you pick up a pack of White every now and then. Another aspect of all that White is that it’s bottle conditioned.  I had never thought about the scale of this process, but Allagash has a big warehouse dedicated to holding all that White as it conditions.

Allagash is one of the most exciting breweries out there. That energy was apparent during the tour. Everyone was willing to talk and let you look in on what they were working on. 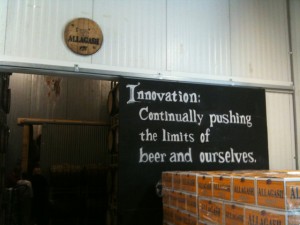