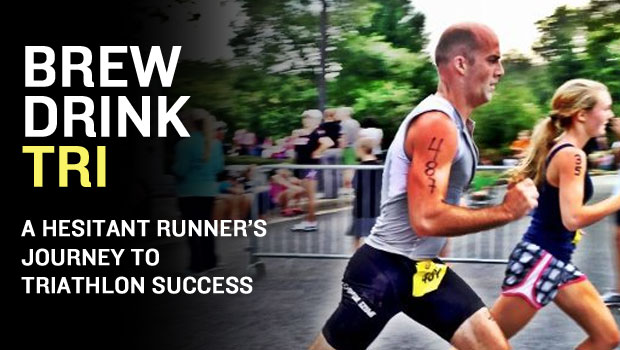 I hate running.  Or at least, I hate running every day.  This is what led me to triathlon.  But allow me to back up a little further in the story.

In December of 2011 I had my annual physical.  I was in about the same shape (doughy) as I had been for the past 10 years or so.  My doctor told me I had high cholesterol and needed to lose weight and exercise more.  This was about the seventh or eighth consecutive year he had delivered that prescription.  I decided I would finally lose the weight in the middle of January.  I started a daily exercise regimen that consisted of alternating cardio work on an elliptical machine one day and body weight strength training the next.  Since I had no experience with strength training I used an app called Workout Trainer for the strength days.  I tracked every calorie that went in or out of my body using an app called Loseit.  I set up a plan on that app and worked really hard to stay under my daily calorie allotment.  I had a goal to lose 30 pounds.  I did that in 62 days.  Ten more were gone in another month and now I had a problem.  I was past my weight loss goal and didn’t know what I was going to do to keep the weight off.  My wife said, “Why don’t you run?”  I said, “I don’t run unless I am chasing or being chased.”

The last time I had run regularly was five years ago.  My wife wanted me to do the Peachtree Road Race with her.  Even though I was an Atlanta native and a runner in high school I had never done the race.  So I, out of shape and doughy, consented and set out to get ready.  I tried to follow a regular training plan and about 4 weeks before the event was up to running 10k once a week.  But I hated every minute of it.  My whole body hurt for hours after every run.  My knees and hips screamed at me with every step.  I tried buying good shoes.  It didn’t help.  I made it to race day, ran the race, and said I was never going to run again.

My original thought was to take up hiking.  I enjoy it but I can’t really do it around my neighborhood and that would make it impossible to do on a regular basis.  Another problem I have is that I am goal motivated.  I do not have the inner ability to just get up and go do something unless I have a reason to do it.  I am also easily bored by repetition.  This causes a problem with most exercise regimens.  As the father of four and a more than full time job I am also limited during the week to the exercise I can accomplish before the start of work and family time.  Spring rolled around I started looking for the next thing I was going to do.

In April I did a run on the beach with my wife.  It felt good except for the huge blisters I developed on both of my big toes.  I took my 3 year old on a 9 mile bike ride with him in a bike trailer. That was a lot of fun and really I started thinking about bike racing.  However, since I do most of my exercise before dawn I knew that would limit my ability to ride.  Then it hit me: Triathlon.  So I started doing some research.  Our neighborhood 25 meter pool was about to open so I had access to all three elements.  I started doing some research and found a race, up at Lake Lanier, called “My First Tri” that was designed for beginners.  Now I had a goal and three different things I could do.  I found a couple of good websites with free training plans and found what would work with my schedule.  Off we went.

In training for a triathlon I run, bike, and swim each twice a week.  I am also lifting weights 3 days a week as well.  I avoided the lifting for the first month or so but really lost some positive physical changes I had during the diet.  I am never bored in training since every day I am doing something different.  I have had a great time doing all of this and feel like an athlete again for the first time in a long time.  Before I even did the “My First Tri” I went ahead and signed up for 2 more during the summer to add to my goals.  I bought my first real road bike on Craigslist for $150 and saw my bike speeds jump 4 mph.  Most of all, I avoided the terrible soreness that I felt the last time I had run.  It probably has much more to do with losing the weight before I started running but I also think that my body feels better because my cardio is varied day by day.   “My First Tri” came and I finished much better than I expected.  I finished 4th in my age group and felt great after it was over.  I was hooked (a good thing since I had two more I had already signed up for).

Ultimately, triathlon solves a bunch of problems I had with running in the past.  Now, I have to say, I enjoy running (don’t tell my wife), but I also enjoy biking and swimming.  The only real negative to triathlon for me is it is an expensive sport with a lot of gear.  The bike alone can easily cost multiple thousands of dollars if you want to spend that much.  I am not that guy.  I have gotten into this sport as cheaply as I could.  Other than the road bike, the only real money I’ve put out has been for a pair of tri shorts and a tri top.

Since this is a blog that’s also about beer I need to say that the volume of training has allowed me to maintain my weight loss while I eat and drink anything I want.  I still avoid some foods that are just not good for me but I don’t worry about calories anymore.  Anything that goes in, I know is going to get burned off.  That is a great feeling.  The last race of the season is coming up for me.  I’ll be at the Jekyll Island Columbus Day Sprint on October 7.  I’m already starting to think about what to do in the off season and how to stay in shape for next season.  I’ll be part of the BDR relay team for the Atlanta Marathon and I think I am going to do my own half marathon sometime this fall/winter as well.  I know that once April or May comes along, I’ll be back to triathlon.  And celebrating with beer after each one.