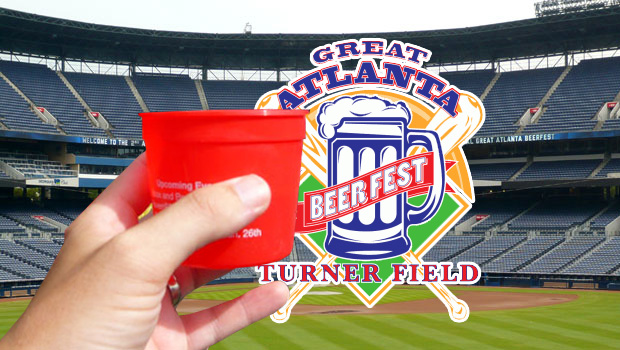 To say I was looking forward to attending the Great Atlanta Beer Fest would be an understatement. It was the first BDR event I would be attending in an “official” capacity and with most of the team present. Lee and Keith were there as well as our additional guest Allen.

My morning started out like anyone’s training for a marathon would — a 16 mile run. I also had to get in a little t-ball coaching; but after that, I was heading straight to Atlanta. I met Lee and Keith at a house near the event and we drove over to Turner Field. I was a little nervous about the 3 pm start time because Atlanta at the end of summer is very hot. Then we had patches of heavy storms right before the fest stared. However, the clouds lifted just at we got there and the weather was perfect. 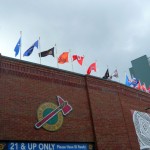 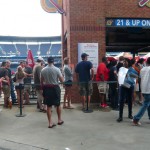 Line to get into the Locals area 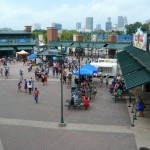 View over the main concourse with the Atlanta skyline 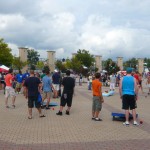 Cornhole in the park 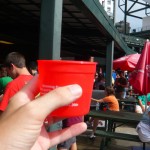 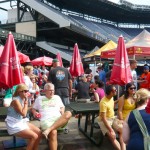 Hanging at the locals area

Parking was simple. We grabbed a spot directly across the main gates of Turner Field for $5 and within minutes we had our 4 oz cups in hand. Boulevard Brewing very recently started distributing to Georgia so that was our first stop. From there we made our way up to the Local’s Only Deck which is in the Chop House overlooking right field and the Braves bullpen on game days. This is where we spent a good bit of our time. It was nice to see the great selection available from our area:

After sampling just about everything on the deck, we decided it was time to walk around the rest of the venue. There were plenty of other great craft beers to sample and even lots of other games. Being it was a Saturday, there were plenty of TVs around showing various games depending on what you wanted to watch. 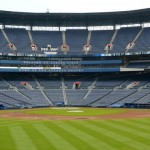 Empty stadiums are eerie, you guys 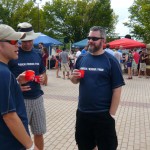 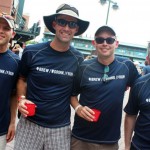 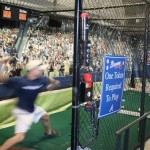 A few of us even took our turns at the batting and pitching cages. It may be easier to do both of those activities before the sampling but it was fun nonetheless. Seeing vendors set up with Bottle Wrenches, beer brewing by Brewmasters Warehouse, and a group from High Gravity Hip Hop, as well as many others, provided more than interesting side attractions.

All this being said, there were a few things that could be improved. Although there were plenty of beers represented as well as other activities, the food selection was lacking. They did have two regular ballpark restaurants open; but I did not notice anything else specific for the event. There was also a good amount of “empty” space left over on the lower deck. This presented a problem once the Local’s Only Deck reached capacity. Around midway through the event, the security staff had to begin queueing festival-goers for access to the Local’s section. It seems that the festival organizers underestimated how popular Georgia’s homegrown breweries would be. However, these small annoyances did not detract from the whole event and the crowd there seemed to really enjoy themselves.