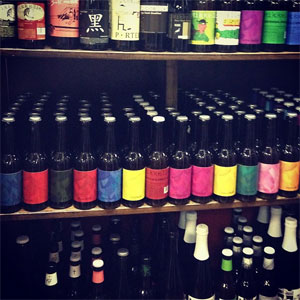 The Charleston Beer Exchange is a craft beer mecca located in historic downtown Charleston, SC. It has a mind-boggling selection of domestic and import craft beers featuring hard to find bottles and local breweries.

From the outside, it’s a very unassuming, hole-in-the-wall establishment. Nestled in the side of an old building, you won’t notice it unless you’re actively looking. There’s limited on-street metered parking right in front and lining the block. The interior layout is narrow and deep. The check-out counter is immediately on your left, featured beers in the middle and local breweries are showcased to your right. There’s a 10-tap growler station and cooler further into the store.

Other than the locals and features, the store is arranged geographically, with the import craft beer in the far back of the shop. I was particularly impressed with the variety of beers from Japan, New Zealand and Italy. The staff was extremely knowledgable about all aspects of their inventory and had a special affinity for some of the Italian imports, which they regularly present as pairings with a local restaurant. I was excited to see a full suite of Hitachino Nest beers including several special releases.

If you’re a Mikkeller fan, there were dozens and dozens of special release bottles on the shelves. Single-hop beer variants lined up to create layered rainbows. On a whim, I threw a To Øl / Mikkeller Walk On Water into my haul. Look for a review of this 14% ABV “Bright Ale” on BDR soon.

As you’d expect, these specialty beers aren’t cheap; but that’s not the Charleston Beer Exchange’s fault. Just go in knowing that you’re going to find something you’ve never seen before and plan appropriately with your checkbook. This is a great shop that’s small in size but big on variety with a smart, friendly, beer-loving staff. Be sure to sign up for their Exchange Club rewards program for frequent-shopper perks like glassware and growler fills. They also have regular in-store events like their upcoming Halloween candy beer pairing. What a great idea.