We moved to Savannah from Atlanta a few years ago, which means we find ourselves in the car a few times a year making the 4 hour drive back to visit friends and family. I always make time to hit my favorite bottle shops and this year’s trip for Thanksgiving was no exception. My favorite places to beer shop inside the perimeter are Hop City, Ale Yeah and Green’s. If you are planning to shop all three in a single day I would give yourself the better part of that day to do so. Unfortunately, like most everything in Atlanta, the stores are pretty spread out in this sprawling city. 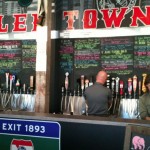 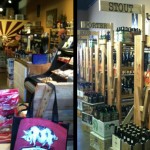 Hop City is almost always my first stop. It is located at 1000 Marietta St., Suite 302 Atlanta, GA 30318. They opened their doors on April 16, 2009 and have been growing ever since. They have recently opened a location in Birmingham, Alabama as well. In addition to bottle beers they sell wine, home brewing supplies and have an impressive growler filling station. The staff has always been friendly when I do have a question, but for the most part will leave me to enjoy myself as I look upon the many shelves of beery goodness. As best as I can tell Hop City has the largest selection of craft beer in town, but of course that means the store sometimes seems a bit picked over when it comes to rarities and seasonals. Quite often when I ask about a new or rare release it has already come in… and sold out. Still, I am always able to find plenty to take home with me to Savannah. We were able to get into town early enough on Wednesday for me to fill my growlers for the rest of the week and to do some bottle shopping as well. I filled three 64 oz growlers with Bells’s Two Hearted, Sweetwater Georgia Brown, and Brooklyn Black Chocolate Stout. As for bottles I stocked up on a few Jailhouse brews, found some Clown Shoes stouts I hadn’t tried yet, grabbed a Mikkeller Spontankriek & Beer Geek Breakfast, as well as a bottle of Stillwater Debutante.

On Friday I got in the car and headed to Ale Yeah in Decatur, GA. Just outside the Atlanta city limits, Ale Yeah is located at 906 W College Ave. Decatur, GA 30030. A second location recently opened north of Atlanta in Roswell GA., so if you find yourself stuck OTP (outside the perimeter) there is still a great place to buy craft beer. The staff has always been extremely friendly and helpful when I am there, and I have found myself in a spirited beer conversation on a few occasions. Although much smaller in size than Hop City, Ale Yeah always seems to have a few not so hidden gems sitting right there on the shelves. I tend to find more limited releases still available that have been long sold out elsewhere. After several laps around the store I loaded up on yet more Jailhouse beers and picked up a bottle of To Øl Snowball Saison, Mikkeller Jackie Brown, Smuttynose Zinneke, Beer Here Kremlin Crude and a couple of gifts for others. While checking out the cashier offered me a bottle of Terrapin Liquid Bliss that was on a one bottle reserve, which was great since that was one of the beers I was specifically searching for on this trip. Don’t forget to ask if there is something you are looking for, it just might be behind the counter. They also have a nice amount of glassware, fill growlers, sell home brewing supplies, and have some awesome Ale Yeah t-shirts that are hard to pass up.

The last stop this trip was a new one for me, sort of. I stopped by Green’s on Ponce for the first time in a long time. I used to frequent Green’s (a fixture in Atlanta and South Carolina) for years, but for some reason I stopped shopping there after we moved. After seeing several stories of great finds at Green’s on the Internet, and personally finding a lot of great beers at the Colombia, SC location this summer, I decided to swing by and check them out. I went to the store located at 737 Ponce De Leon Avenue Atlanta, GA 30306. It is your classic package store selling beer, wine and liquor. You can also find another location a bit further north at 2614 Buford Hwy NE Atlanta, GA 30324. I used to shop here quite a bit back in the day, but mainly for variety 12 packs and other craft beers you might not find at the grocery store. Looks like this location has recently added a temperature controlled beer cellar, so yeah they have upped there craft beer game since the last time I was here. My biggest score from this Atlanta visit was actually found here when I spotted some bottles of Bell’s This One Goes To 11 Ale in the cellar. Two bottles of that were the first things in my shopping basket. I also purchased a bottle of Stillwater Stateside (Chardonnay barrel aged), Smuttynose Scotch Ale, and several Mikkeller beers which were plentifully stocked. I was absolutely impressed enough to add them to the Atlanta Beer Shopping trinity.