I decided to take on the Coffee and Cream Stout recipe in anticipation of the arrival of winter and because it just sounds good. Extreme Brewing is a well laid out book, broken into chapters titled Extreme Ales, Extreme Lagers and Extremely Unique Beers. The Coffee and Cream Stout, written up by Jerry Franklin, can be found in Deluxe Brews.  What I like about Extreme Brewing is that most of the recipes are malt extract recipes that are accessible for those of us who aren’t ready to take on all grain.

The process is straight forward enough. The Northern Brewer order would be (though I had a few of these ingredients lying around and didn’t have to order them): 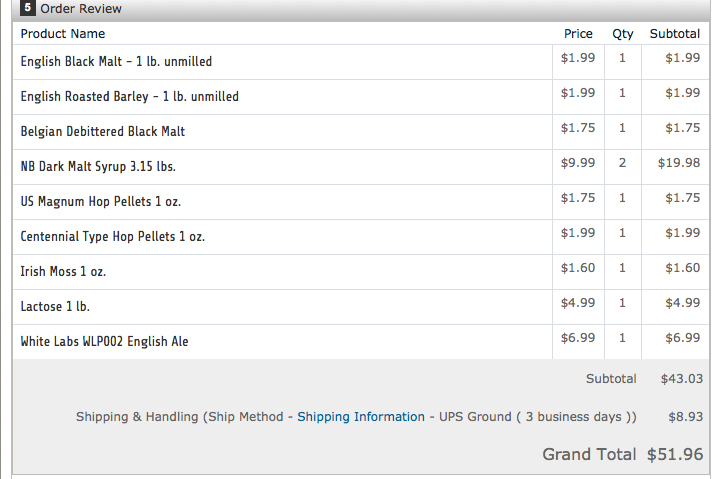 The only missing ingredient was the whole bean coffee which, being a bit if a coffee snob as well as a beer snob, I had in my pantry. Many of the ingredients came in larger quantities than needed so you are largely ready for another go at this if it turns out well. 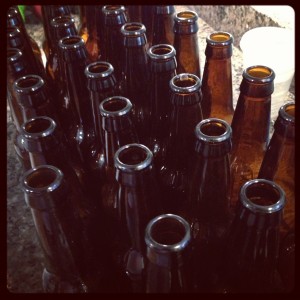 The first step was a bit different than other brews I’ve done. The first step of most brewing recipes involved heating up water to a given temperature prior to adding the grains, but this recipe calls for adding the grains into the cold water allowing them to slowly heat up to temperature with the water. After the steeping was finished the rest of the brewing workflow was the standard, off heat, malt addition and end of brew hop addition. Two ingredients I had not worked with before were the gypsum and Irish moss additions but I wanted to follow the recipe so I added them in. There was one deviation I made from the recipe. I had some whole leaf Centennial hops that I substituted for the hop pellets.

After the boil the lactose was added and into the cold bath went the wort. After reading Lee’s post I decided not to try the whirlpool technique advocated in Extreme Brewing. Transferring to my primary fermenter I pitched the yeast and into the closet it went for a long five days.

The five-day mark is coffee addition day. I made this my transfer to secondary carboy day as well. After making the transfer added my coffee. This wasn’t a nicely brewed pot of coffee but 24 hour cold stepped coffee that carried quite a punch. The beer went back into the closet for a week.

On bottling day, set up as usual moving my stout into the bottling bucket with the (table sugar) primer. I had to give it a taste before I bottled and was surprised at the sweetness of the beer. It was so sweet I was a little worried I would not like the final product as it overwhelmed the coffee flavors. I should not have worried. After two weeks in the bottle the coffee has resurfaced and the sweetness had receded. I’ve tried many coffee stouts and I’d have to say that this one stands up to most of them.