Is there anything better than randomly stumbling upon a brew pub?

On a recent driving trip from Boston to Maine, we took a short excursion into the quaint downtown of Hallowell, ME. We found a chowder restaurant on Yelp with decent reviews that piqued our interest. However, once we parked the car and wandered down the surprisingly busy main street alongside the Kennebec River we saw the sign for  The Liberal Cup and a new plan was hatched. I’m not one to turn down trying a small, regional craft beer, especially in an area with such a rich brewing tradition.

We settled in to a street-side table with a large window and ordered the sample paddle. I was able to try 3 ounces each of Alewife Ale (American Amber), Bug Lager (American Adjunct Lager), Chazmo Altbier (Altbier), 1762 Rye IPA (Rye), For Richer or Poorter (Porter) and Backhouse Bitter (English Bitter, cask conditioned). I was especially impressed with the Bug Lager. From my tasting notes:

While it’s nice to have a wide variety of house-produced beers available, the food was the real star. I had a cup of beer cheese soup (made with the Bug Lager on my visit), followed by the Fishwich – golden friend Haddock topped with cheddar cheese on a large roll. Both were outstanding.

Hallowell is picturesque, even in winter, providing a welcome respite from the horrors of interstate traffic. The bustling downtown saw shoppers and foodies rubbing elbows for entrance into antique stores, bars and even a candy shop. After our meals, we spent a few minutes exploring the strip and the river front before heading north to Acadia. If you’re in the area, The Liberal Cup is well worth a stop for a little bit of beer heaven. 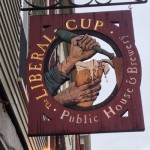 The Liberal Cup, Hallowell, ME 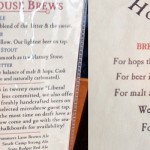 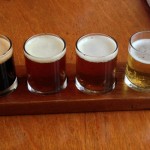 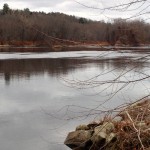 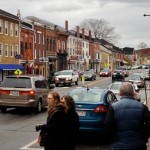