Part of my goal in my homebrewing hobby is to create a recipe that I will want to drink no matter what the season. I wanted to make something relatively simple that I can brew between more complex and seasonal batches just to be sure I always have homebrewed beer available in my refrigerator year round. That made me want to dig into some homebrewing books and chase trying to perfect a pale ale recipe.

As I mentioned in my Online Homebrew Toolkit, my recipe tool is Hopville. I have used it to help me create separate batches of the same general recipe. I have been adjusting the grain bill and hop profile based on tastings over the past 9 months of me brewing this recipe. I recently brewed the fourth iteration and I think I have it pretty close to what I would consider perfect. The first batch was too malty for my taste so I adjusted the hop profile to get a little more bittering balance. The second batch had the right malt bill except still not quite the right bitterness and flavor from the hops so I adjusted the malt bill and made another small tweak to the hop profile. Batch number three was not malty enough so I decided to kind of start over with batch number one again. I bottled batch number four about a week ago and it tasted as I was hoping from the start so I think another few weeks of conditioning and a day or two in the refrigerator will do it some good. 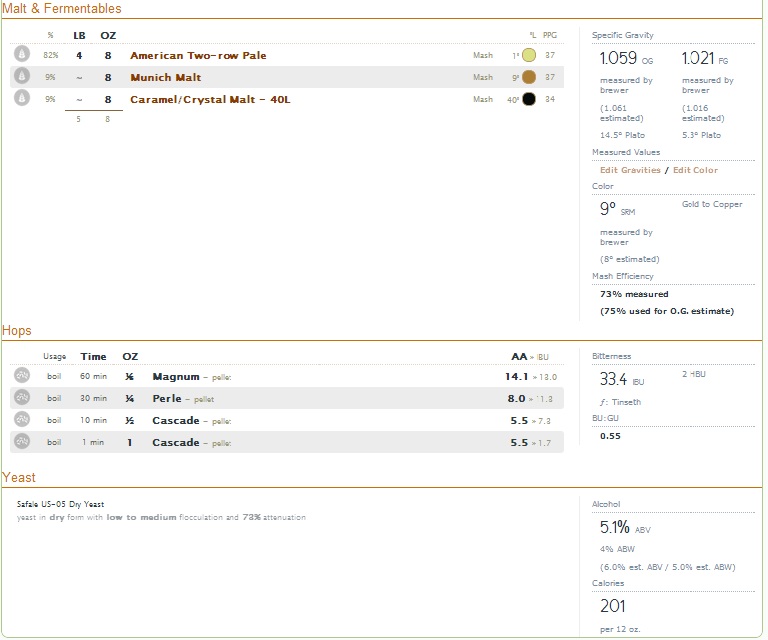 All that being said, I know that I made mistakes that would make it nearly impossible to repeat this batch. I did not mill the grains to the right consistency and that affected the efficiency of the mashing and lautering process. I also know that I did not have the right water amounts by about a 1/2 gallon or so because my final amount was less than I planned for. Finally, my mash temperatre was a little hotter than my goal which will also affect the flavor and mouthfeel as well as the ability of the yeast to finish all the conversion of the starches to alcohol. The good news to all the iterations and mistakes is that I can just try again and will enjoy it either way.