Knowing our mission, “Brew Beer. Drink Beer. Run It Off”, I decided to try to contribute to the “Run It Off” portion by brewing a low(er) calorie, full-flavored, homebrew. We all probably know that the non-craft breweries make their beer lower in calories through a mixture of lower alcohol and higher adjunct brewing. I wanted to shoot as low as I can without sacrificing the flavor we all have come to love about craft beer. 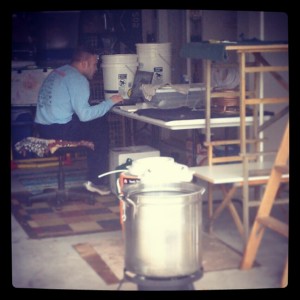 I decided to start with my favorite recipe I have created so far and “tone it down” a little bit. I used 2-row, rye, and crystal-40 malts shooting for a 1.045 O.G. instead of 1.075 in the normal IPA. The second change I made is in the mashing temperature. I normally shoot for about 154 °F for one hour for my mash but after some research, I decided to shoot for 150-152°F for one and a half hours. The research indicated that the temperature range will result in more fermentable sugars in the beer and less sugar consumption during drinking but it will reduce the body or mouth-feel of the beer. This will allow me to get the higher alcohol content than a normal “light beer” but not sacrifice all of the flavor. I stuck with the IPA version of the hop profile but I reduced the amounts to balance out the bitterness and flavor imparted by the hops on the reduced malt bill.

So far, I am only seeing only one drawback. I have a single cooler as a mash tun with only one temperature at the start and no way of modifying the temp throughout the mash. Therefore, I had to start the mash at 154°F and the temperature should drop into my 150-152°F range by the end of the mash. I plan on updating in a few weeks to let you all know how it progresses. My current schedule is to secondary in a week, bottle schedule for 3 weeks, and put it in the fridge for a day or two to enjoy. 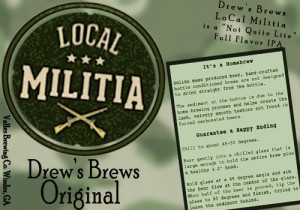 I bottled from the secondary a week ago and wanted to update my progress. I am very excited (as is Nicole) in the taste so far. The aroma hops (Citra) come through really strong and the bittering hops stay muted until it is warm. The malt backbone is present throughout and the rye spiciness is spot on. I have another 2 weeks conditioning until I want to taste one fully carbonated but I am excited as of now.

Success! Nicole really liked it and I must say it was a very good beer. The Citra hops were a little muted but still present. The bittering hops come through a little more than before now and the malt backing is still present but the only disappointment was that the rye spiciness was less prominent. 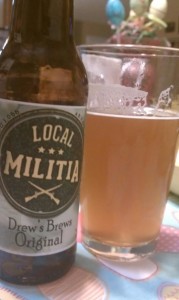 I plan on brewing this again and do not plan on tweaking anything except the batch size. I am shooting for a 5 gallon batch this time since the grain bill is small enough to allow for the room in my 5-gallon cooler I use for a mash tun.