I was fortunate to attend the fourth annual Brewvival festival hosted by Charleston’s own Coast Brewing and the Charleston Beer Exchange. Brewvival is a beer festival that is designed by and for beer lovers. Most beer festivals depend on donated beers from the participating breweries and this results in the same beers showing up at each festival. If you’ve been to a lot of craft beer festivals, Brewvival 2013 was a refreshing change. They pay 100% upfront for the beers they serve. This allows smaller breweries that ordinarily can’t afford to donate beers to festivals to participate. Also, larger breweries end up sending extremely limited release beers.  We’re talking brandy-barrel aged this and casked beers with cherries and pink peppercorns that. If you enjoy craft beer, the rarity factor alone is reason enough to attend. I’d stop writing here but I feel obligated to include a few more tidbits. 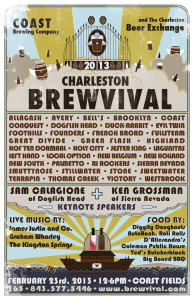 Brewvival is held each year in the field outside of Coast Brewing in North Charleston, South Carolina. In the past few years I’m sure it was picturesque. Unfortunately this year it had rained hard the day before and continued to rain aplenty throughout the day of the festival. This resulted in quite a bit of mud. I discovered my “rain jacket” was more of a “wind-breaker” and really didn’t help one bit. It is a good thing there was plenty of bourbon-barrel aged stouts on hand to warm me up.  I’m also glad the festival was so well planned and executed. The good folks who organize Brewvival set up a shuttle service to and from the festival so I didn’t have to navigate the unfamiliar streets in the rain. They also put a great deal of thought into the layout of the brewery tents, food trucks (!), port-a-johns, and music stage. And listen to this: They limited the ticket sales (1,800 instead of last year’s 2,200) to shorten lines!

If you aren’t marking off the days on your calendar till Brewvival 2014 just yet let me share some additional reasons my hat is off to Coast and CBX. The second reason I enjoyed Brewvival over other festivals was the number of brewery founders/brewmasters on hand. I’ve encountered a few regional reps at other festivals but never the founders themselves. Also, the beers are usually poured by volunteers (in part due to state law) and not people especially knowledgeable of the beers. That wasn’t the case at Brewvival. If the person pouring the beer wasn’t intimately involved in the making of the beer they were at least a distributor quite familiar with the product. I had the good fortune to run into Jeppe Jarnit-Bjergsø, the founder of Evil Twin Brewing. He was kind enough to stop and answer my inquiries. Jeppe illustrates how the Charleston beer scene is really on fire. Here is the founder of one of the top ten breweries in the world according to Ratebeer.com attending a small festival in a small city. He has collaborated with Westbrook Brewing, another Charleston brewery, and will soon brew a special one-off beer for local heritage meet providers Revival Foods. Oh yeah, and Sam Calagione, founder of Dogfish Head, and Ken Grossman, founder of Sierra Nevada, were there as well. 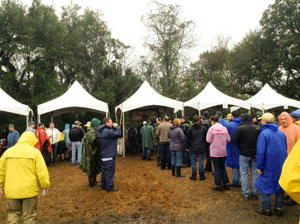 So, what great beers were there you ask? There are too many to list them all, but I’ll name a few. Dogfish Head was there with their 120 Minute IPA, the double version of their famous 60 Minute IPA. It clocks in at about 18% ABV and Brewvival’s allotment was “Randallized” through a container of Simcoe hops. That was a beer I actually preferred to only drink about four ounces of despite the incredible taste. Jester King Brewery was there as well, in a rare appearance outside of their home state of Texas. The five beers they brought drew some of the longest lines of the festival. Their Boxer’s Revenge, an organic barrel aged wild ale, was especially tasty. Some breweries got a bit carried away – but that’s a good thing. How does Barrel-aged Wake-n-Bake Coffee Oatmeal Imperial Stout with Cherries from Terrapin Beer Company sound? How about a Belgian Blackish Brown Imperial Strong Dark India Pale Ale Waffle from Holy City Brewing Company?

My only real complaint is that a beer festival is actually a poor place to truly enjoy these incredible beers. That is to say the festival’s selection is too good. To fully experience any of these fine creations one needs a full 8, 12 or 16 oz pour into the proper glass. Then you need to be able to take your time consuming the beverage. Luckily for me (and you) the Charleston Beer Exchange is open on Sundays and they have quite the choice group of beers for sale.

Let me share some advice for when you go next year: Take advantage of the shuttle service. This is a great deal at $5 each way as a taxi ride will cost you upwards of $50 to downtown Charleston and I imagine a DUI even more. Also, drink plenty of water. It’s available at every beer tent. It’s not just for rinsing out your tasting glass! Finally, know that you won’t be able to try every beer you want to drink. There are just too many rare and limited release beers to try. I can tell you the 15 or 20 3-4oz tastes (that I recall) were more than enough. The Brewvival website publishes the beers on hand in the weeks leading up to the festival. I recommend you use the list to plan what beers are can’t-miss for you.

Whether it is sunny and warm or rainy and chilly outside Brewvival is the craft beer festival of choice. It presents superb food, music, and well-crafted beer. Do yourself a favor and try not to miss it!

About Jonathan LeeJonathan works in wholesale at Savannah Bee Company and lives in Savannah, GA with his girlfriend. With her somewhat hesitant support he plans their trips around what breweries are in the area and always drinks his beer from the correct glassware. You can follow him on Twitter @JnthnL.