Hunahpu’s Day is held each year on the second Saturday in March at Cigar City Brewing in Tampa FL. It is the official release each year for their Hunahpu’s Stout. Last year Lee and I made our way to the festival and it was one of the best beer experiences of my life (Tap List: Hunahpu’s Day 2012). In fact without that trip I don’t think Brew/Drink/Run would exist at all (but that is a another story for another day). Cigar City blocks off their entire parking lot and sets up one of the biggest beer parties of the year. Needless to say I was more than excited to head back again this year. Unfortunately Lee could not come with me this time, but I convinced my wife Emily (ever the craft beer widow trooper) and my dad to join me. Emily and I packed a suitcase and our daughter in the car on Friday and headed to my parents’ house which is not far from Cigar City. We got up at about 5:30 am on Saturday since the gates were supposed to open at 7:50 am. They opened earlier but we will get into that later. Lee and I learned a few lessons the year before so this year we packed: three collapsible chairs, LOTS of water, sunscreen and hats. By the time we showed up there was about four times as many people lined up as there were the year before! The line to get in went at least 2 city blocks and then snaked into the neighboring shopping center. I knew we were in for a long day and so set up shop at the end of the line and waited for Hunahpu’s Day 2013 to begin:

The big rumor going around the grounds this year was about how the festival has gotten too big and has to change. A lot of the people I ran into were talking about the CCB owner stating that next years event would “look a lot different”. Clearly the space could not hold the amount of people there. I don’t know if they need to move the venue or sell tickets to keep the numbers manageable. As for me, all the negatives will probably not keep me away next year. A chance to have bottles of Hunahpu’s Stout is worth almost any amount of hassle. I will say that I learned a valuable lesson from the Super Pint Bros.: Bring your own bottles to drink and share. The fun is in being able to meet beer lovers like yourself, not in having to fight the crowds for a 8 oz pour. 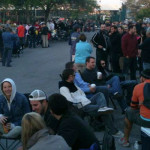 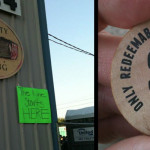 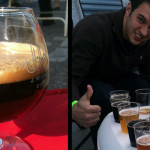 Always exciting to get fresh pours at Hunahpu’s Day 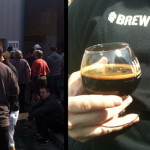 Lines are long – bring your own glassware 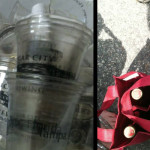 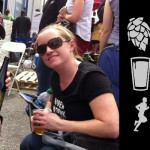 Keith and Emily with their new baby Hunahpu