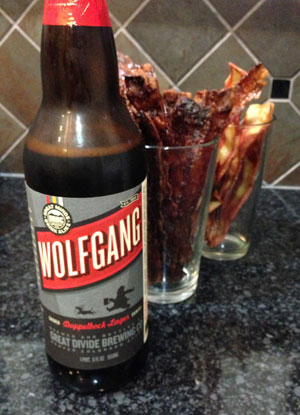 Whether you’re looking for another outlet to absorb your homebrew backstock or a great party treat made from your favorite beer, you simply can’t go wrong with beer candied bacon.

I came across this recipe from Tide and Thyme to use as my base. I only made two alterations. The first change was the beer. I grabbed a Wolfgang Doppelbock from Great Divide out of the fridge. The second was the addition of not only center-cut “real” bacon – but also veggie bacon.

The Wolfgang was a great choice for the base beer. The malts and bready-sweetness really came through in the finished product. It would be a lot of fun to do a blind taste test with candied bacon made from various brews to see if you could pick out a beer’s characteristics without prior knowledge. You’ve definitely got to go with a big beer to compete with the salty, fatty goodness of a thick slice of bacon.

I wish I could give the same “thumbs up” review to the veggie bacon. It was pretty much sweet cardboard. How much of that was just the innate badness of veggie bacon? I can’t say. The veggie strips cooked much faster than the real bacon and I kept it the oven longer than necessary to try and build up enough of the beer glaze to caramelize. That added cooking time definitely dried out the end product and made it less than enjoyable. Our one vegetarian participant in the challenge insisted it wasn’t that bad; but I have a feeling he was just being polite.

All in all, it was a fun experiment and a welcome addition to a Monday night bottle swap. I’m sure I’ll make the legit bacon variety again, quite possibly with the blind taste test addition.