Dogfish Head Miles Davis’ Bitches Brew is a Russian Imperial Stout, and was the first Sony Music collaboration. It was originally brewed in 2010 to honor of the 40th anniversary of the original release of the album Bitches Brew. What we have here is a bottle purchased in late 2012 or early 2013, this got kind of lost in my “cellar” and I was happy to find it.

From the DFH website: a dark beer that’s a fusion of three threads of imperial stout and one thread of honey beer with gesho root. It’s a gustatory analog to Miles’ masterpiece. The beer is big, smooth, sweet and rich. I am tasting big roasted malts and some slight alcohol in there as to be expected. More interesting notes of root beer/cola, black licorice, smoke, dark honey, and chocolate. I really enjoyed this when it first came out almost 3 years ago, and that hasn’t changed over time. One of those beers I will pick up a bottle or two of each time it is released. 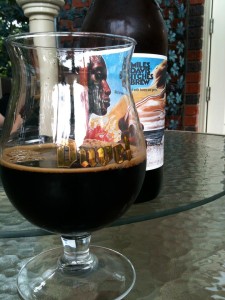