Our second stop this summer was a return trip to Asheville, NC. The last time around we didn’t have quite enough time to get to Highland Brewing Company, but after having a chance to chat with Highland founder and president Oscar Wong at The Savannah Craft Brew Fest last Fall I wanted to make it a point to stop by this year.

Asheville’s first craft brewery, Highland Brewing Company started in the basement of Barley’s Pizzeria & Taproom in 1994, but as their operation grew they moved a few minutes outside of downtown. As you reach the brewery sign you work your way up a picturesque winding road. This is a very appealing sight, especially since so many breweries are in such ugly industrial areas. At the top of the hill are several large industrial buildings, the last being Highland. It is very clear that the overall experience and aesthetic was a major concern when building the brewery out. The outside is landscaped and inviting, even the doors are fantastic. Intricate iron designs of grains and hops are both on the door itself and handles. They expanded into the Southern Railway building where a large taproom was built in 2010. The bar lines one side of the large room, a nearby corner is dedicated to merchandise sales, and a stage is in the opposite corner from the merchandise. Obviously they host music and other events, and on this day there was some kind of networking seminar taking place when we arrived. My favorite feature was the offices that were made out of old industrial shipping containers. I love how the employees are right there “in” the taproom while working at their desks. Happy hour is not far for these folks! 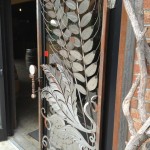 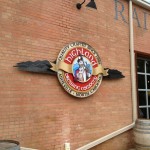 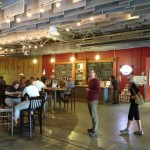 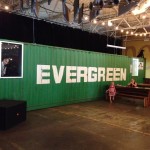 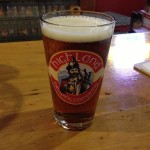 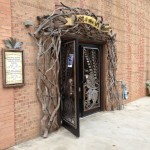 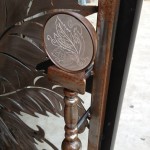 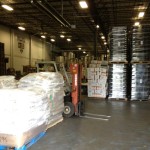 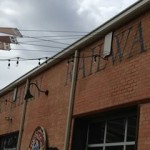 The tour for the day was about to begin but we passed, opting to hit the bar for a beer. Oddly the beer was the biggest disappointment of this brewery visit. Not because it’s bad, I’ve been a fan of Highland beer for quite a while now. It was because apart from one beer, there was really nothing on the draft board that was out of the ordinary or new to me. For me a big part of visiting breweries, especially those with taprooms, is the ability to sample beers I couldn’t get otherwise. I guess I shouldn’t have been surprised though. When Raymond and I chatted with Oscar last year he said (and I am paraphrasing from memory) that from a business standpoint the risk of big barrel aging programs & one off productions doesn’t make sense. He would rather focus on producing quality year round and seasonal beers. He did admit that people are demanding they do more limited beers which may force them to produce more than the occasional one off in the future. On this day I enjoyed a pint of Saison and Emily had the Razor Wit. Jacqueline ran around a bit, but with the size of the room I wasn’t too concerned with her bothering anyone. There was no food available inside, but there was a guy sitting outside with a hot dog cart selling franks and veggie dogs. I don’t know if he is always there, but it is always good to see at least some kind of food option for those who need it.

Easily one of the most visually appealing breweries I’ve been to, and I would say it is worth the visit just for that. If you haven’t tried many of their beers, your visit will be even better!