I love Charleston, South Carolina and take every opportunity to visit there. I was fortunate enough to visit with family not long ago. While this was not a true beercation I did have time to slip in a few drinks and visit a few beer centric places. Charleston is without a doubt an up and coming beer destination evidenced by the fact that was not the first time a BDR team member has made a trip to Charleston. In addition to this story you can read up on the reviews of Charleston Beer Exchange, Closed for Business, Charleston Beer Garden Festival and the Brewvival beer festival.

I used these reviews to get me started on my trip. In particular I found Lee’s suggestion to visit CBX to be a great one and I hit them up early on to make sure my hotel mini fridge was well stocked.  I won’t rehash old reviews but I can say that CBX and Closed for Business are still going strong and are worth a visit. 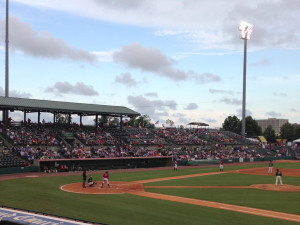 I do have several things to add to your list if you are making a trip to Charleston. Always a baseball fan I paid a visit to the local minor league team the River Dogs. The River Dogs are a class A affiliate of the New York Yankees and play at the very nice Joseph P. Riley Stadium, better known as the Joe. Every Saturday night at the Joe is craft beer night. At first I was a little disappointed at the selection of but with a little hunting I found good number of local brews and was able to satisfy my craft beer fix. The Joe is also the Site of the Ballpark Festival of Beers. This event was taking place a week after I left so I can’t report back how it went but the brewery list looked good it’s a good reason to visit Charleston again. 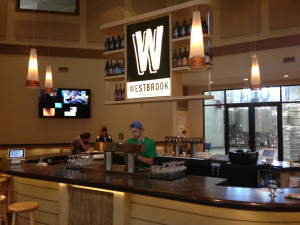 The local brewery scene in Charleston is  exciting. Palmetto Brewing is a longstanding Charleston brewery. I’ve had several of their beers but gave the Espresso Porter a try for the first time and became a fan. Holy City Brewing has some very exciting offerings. In particular the Pluff Mud Porter drew me in. I didn’t make it to the brewery on this trip, but the tasting room sounds like a good place to be and they have root beer for the kids. Interestingly they also sell home brewing ingredients though no equipment. Westbrook Brewing has, in my opinion, quickly become one of the more exciting breweries around. Their reputation for unusual, sometimes strange, but high quality beers along with a few interesting everyday brews is well deserved. The week I was in Charleston, Westbrook released two new everyday beers in cans: the excellent One Claw, a rye beer, and Gose a salty sour ale. Knowing their reputation and loving their beers I made sure I slipped in a quick trip to the brewery. It’s a short 15 minute drive from downtown and well worth the trip. The facility is wonderful and the tasting room well stocked with a nice line up of Westbrook beers and the gypsy Evil Twin Brewing with whom Westbrook has a strong relationship.

As I looked closer there are many craft beer centric locations in and around the downtown area. Unfortunately I didn’t have time to visit them all this time around but as I said I’m ready for another visit sometime soon. Next on the list are Craftsmen Tap House and Coast Brewing. I may even take a tour with Charleston Brew Cruise, which doesn’t involve a boat, but a bus trip to three breweries or a walking tour of downtown with a few stops in local pubs.

Obviously Charleston is a good place to be if you are into craft beer with a lot going on. For up to the minute updates on Charleston beer events I recommend checking out CHSbeer.org and following them on Twitter @chsbeer.

Charleston is also a great running town with a very flat terrain that provides for plenty of easy runs. Make sure you include the Battery on a loop for a great view. If you need to add some hill work into your routine the Cooper River Bridge has a nice wide pedestrian track. This is no minor bridge so make sure you take some water with you. You might consider scheduling your brewcation with the Cooper River Bridge Run. I have not run this race in a few years but I found it to be a very well organized if difficult race. For your gear needs I recommend The Extra Mile, located right in the center of downtown. 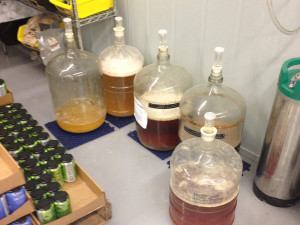