Our third brewery stop on this year’s vacation was at Dark Horse in Marshall Michigan. On this travel day we planned to stop for lunch at a brewery along the way, and coming from Detroit going across the state to Lake Michigan we had a couple of options. One was to head a bit out of our way north to Grand Rapids to visit Founders. I was highly tempted by this, and in fact this was our original plan, but the more I looked at the map I realized that Dark Horse would be directly off of I-94 which was right along our travel route. Logic prevailed and we made our plans to stop there.

The brewery is not very far form the picturesque downtown Marshall. Classic small town America, this is what you picture the mid-west looking like. It seemed the town was doing pretty well with most of the store fronts housing small businesses. The brewpub was in a wood shingled building nestled behind what I assume was the main brewhouse. The atmosphere inside was bustling for lunch, and we all made a pit stop before sitting down. All of the tables are tall tables seating a minimum of six. The walls are covered with pictures, doo-dads, scribbles, business cards and notes. I even found a place to stick a BDR business card before we left. (Look for it when you visit!) The ceiling and some of the walls are covered in ceramic mugs. It seems the mug club is popular in this part of the world. When you join you receive a 20 oz. (?) mug that lives on at the brewery, when you come you back you go get your mug and they fill it at whatever the regular 16 oz. price is. I saw several people retrieving their mugs while we were there. Although the mugs hanging everywhere looked pretty neat, it gave the pub a very claustrophobic feel. Our server was very friendly and extremely patient with us as we worked out what we were going to eat. As pescatarians there were not a lot of options on the menu which featured pizza, calzones and sandwiches. Our requests to substitute some meat items seemed to not be a problem, and although Emily’s food came out with chicken on it, it was quickly fixed. The food was quite good and if I remember correctly I had the Patchouli Zone calzone and Emily had the Longbeard Fold. The highlight of my daughters visit was the house made Lime Soda!

Oh and yes we sampled a few beers! Emily had the Raspberry Ale, a surprising choice given her tastes, but it turned out to be pretty good. I couldn’t enjoy too much since I still had a bit of driving to do, but I did sample a couple of IPA’s that were on draft that day: Artic Dekoorc Eert and SC-7 Dekoorc Eert. Both were pretty solid, but unfortunately I lost my tasting notes along the way and can’t give you any specifics on the beers. 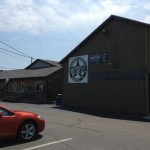 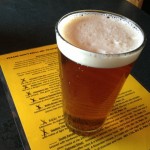 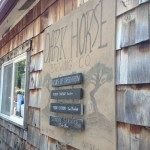 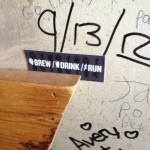 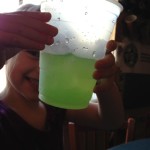 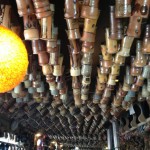 The most interesting thing to me was just the overall vibe of the property. Next to their general store was an operating bike shop. In fact, there were several motorcycles coming in and out of there while we were there. Seemed a bit out of place at a brewery (the bike shop, not the bikers), but hey someone must like motorcycles, right? I went into the general store to pick up some beer before we left. I went with a mixed six pack of beers I hadn’t tried from them yet, and a couple of bigger bottles that sounded interesting. Once again I was surprised by the store itself. They were selling beer, t-shirts and homebrew supplies, pretty normal stuff. Oh, and skateboards. Decks, trucks, wheels etc. Everything a serious skateboarder would need. When I was checking out I had to ask the guy what the deal was with the bike shop and skateboard stuff. The answer was pretty simple, the owners had lots of interests. He even told me they were about to open dairy just down the road! Makes sense, and I love how they aren’t afraid to mix interests, and it seems to be working.

Dark Horse is worth a visit for sure. The brewery does offer tours on Saturday and Sunday for $10.00 per person which includes a tour of the production facility, pint glass and tasting in the VIP Loft. You can visit the website for all of the operating hours and any special events.