Labor Day weekend is always a good time to imbibe in a few extra beers, and the Savannah Craft Brew Fest makes that goal easily achievable. The 2013 edition of the festival was the first to be managed by Red Mountain Entertainment which quickly made a noticeable impact on the fest’s organization while still keeping the highlights for which the festival has become renown.

The major logistical decisions were the same. The Savannah International Trade and Convention Center remained the location for the day’s festivities. However, there were some obvious improvements to the set up. More breweries were located inside the large, air conditioned exhibition hall, which meant that there was more time to take respite from the oppressive southern heat. The concession stand was open and rocking, filling up baskets of beer-absorbing grub as quickly as possible. It seems that more sales reps and brewers were on hand than in previous years, standing alongside the volunteer pourers and answering questions from patrons. Draft Magazine’s tent was a DIY pretzel necklace stand, providing those who didn’t want to purchase a platter of nachos a free alternative for filling up. 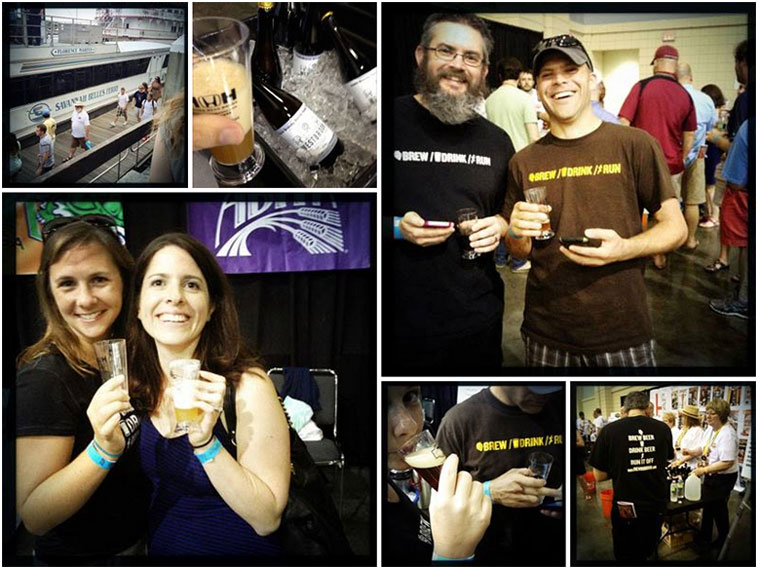 For even more photos from the day’s event, check out our Facebook album.

The VIP area was an oasis from the throngs of the sold out event. Even the higher-priced VIP tickets sold out several days in advance. The added cost is worth it for the ability to enter an hour earlier than general admission, not to mention the prestige beer selection. From the signage present it was obvious that some of the planned beers for the event didn’t show up; but what was there was excellent. New bottles from Founders (Magno Magnifico) and Westbrook (Apple Brandy Barrel Aged Tripel) were on hand as well as special kegs and casks from locals Southbound (IPA with ginger and whiskey chips) and Terrapin (bourbon-barrel Moo Hoo). It would be great to see the VIP area built-out more with additional seating or staging to give more of an exclusive-feeling environment to accompany the rare brews.

There’s nothing that can be done about Savannah’s perennial Labor Day heatwave and the scenic view on the river means that the majority of the event has to be (and should be) held outside. That said, the thick, stifling air does make waiting in line a bit more tedious. The large, thirsty crowd meant that several breweries were running out of beer within the first two hours, which was a bummer for those arriving later in the day.

Having more food options was a big improvement; but the food was also running short as the day progressed. Vegetarian options were scant. Additional concession options would be welcome, especially from some of Savannah’s amazing local restaurants.

Despite any nitpicking, the major attraction for any beer festival is the beer and this year’s line up did not disappoint. With the expansion of the craft beer world, that translated to more breweries in attendance – both in global and regional representation. On one hand, it was particularly nice to see the D&V International table for added emphasis on Belgian beer. On the other, it was great to see newer state breweries like Burnt Hickory and Three Taverns creating converts from the festival attendees. The set up of vendors was excellent in that it made it very easy to find newer breweries like River Dog around the corner from established lines like Samuel Adams.

For the Brew / Drink / Run crew, this is the premier local craft beer event of the year and we’re prouder than ever to claim the Savannah Craft Brew Fest as one of our own. We’re looking forward to seeing what the new management has in store as it continues to improve on this year’s successes.