Our final brewery visit this summer was probably the one I was looking forward to the most. It was in fact the pre-determined highlight of my whole vacation. A beer geek with a chance to go to Three Floyds? I was like a child waiting for Christmas!

When the day finally came I tried to be relaxed, but I was very anxious to get on the road for the hour drive. After doing some research though I realized that there was ZERO meat-free options to eat. Keep that in mind if you have a restricted diet. So that meant we would have to leave after lunch which only increased my anxiety and anticipation. This was all about Zombie Dust of course. I would have been pretty devastated if I didn’t get a chance to pick up some of that beer from the brewery, and with each tick of the clock I worried I was not going to be able to haul some back. Getting to the brewery was easy enough, we even gained an hour by passing into the central time zone… I was finally here at Three Floyds! 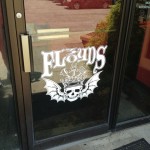 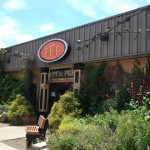 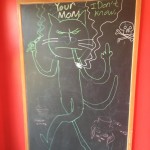 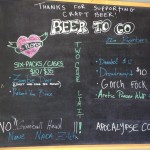 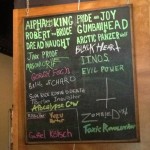 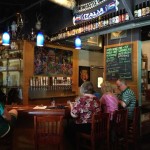 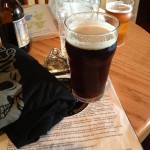 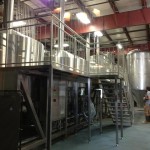 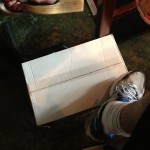 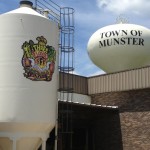 We were sat in the brewpub fairly quickly at one of the few empty tables. For some reason we were told we had to sit in a certain area (not the bar) because we had our daughter with us. Not sure if that was a legal thing or just their policy. Either way I didn’t care. I took a quick glance at the beer list for to-go sales and there it was… Zombie Dust (one case limit) was still on the board! Whew. We settled into our tall bar table as best we could and ordered a round.

Jacqueline (my daughter) was not quite as easy to deal with as normal on this day, and given the amount of beer related things I put her through I was pretty understanding. She was complaining of being cold, and in all fairness the AC was cranked on the very hot day. Since I was planning on picking up a t-shirt anyway I hit the retail area so she could put it on and maybe warm up a bit. As I was buying my shirt, I made a comment about it looking like they had plenty of Zombie Dust today. There was about ten cases stocked behind the counter. At this point the guy running the register said, “get one now”. I started to asked a follow up question and he just repeated himself, “If you want one grab it now. This is all we have and it will go really fast”. Enough said. Back to the table I went with a t-shirt and a case of Zombie Dust to use as a foot rest for the rest of our visit. I have read a bit about Three Floyds being the most “unfriendly” bar around, but that was not our experience at all. That guy went out of his way to assure I got a case of ZD, even gave me a free sticker! Our server was very busy, but never took it out on us. Not sure where they got that reputation from but I was happy with our experience.

As much as I wanted to drink some of the beers I’d already tried and loved I opted to tick a few new beers this day. First up was Pride & Joy. This is a very nice and hoppy session ale. Bold for 5% ABV beer, I would be happy to drink these all summer. It drinks like a milder version of Alpha King to me. I went with Robert the Bruce for round two. This was rich and malty with some fantastic roasted nut flavor. It’s hoppier than a traditional English Scottish Ale, but I’m not complaining. I am not a guy who rushes to this kind of malt forward beer, but I found this one rather impressive. Although I wanted to try them all I did have to get us back to our vacation rental, so I ended with a short pour of Toxic Revolution. From the menu at the tap room:

This stout ale is the combined efforts of Municipal Waste and Three Floyds to create a black liquid wall of death in your mouth. Enjoy!

This was an incredibly dry stout with a ton of huge roasted malts. Some chocolate and a bit of citusy hops, but I had a hard time getting past the dryness. If I didn’t already have a water I would have had to ask for one! Before we left I picked up a few 22oz bombers to take home and give away, and I also splurged on a sexy long stem tulip glass.

Although an almost religious beer experience for a beer nerd like me, there were a few drawbacks to this trip. First off is the music. I am a fan of metal, and I can even deal with death metal in moderation. Unfortunately for the entire 2 hours we were there our ears were pummeled by the un-intelligable vocal onslaught. As Emily put it, “Great beer, too much cookie monster!” Secondly the place really isn’t all that family friendly, which is generally fine in my book. Simply because I have chosen to have a family doesn’t mean every business should cater to my needs. Just take note that if you choose to bring your children here there is no place for them to run around, and they will probably end up watching some inappropriate move on the TV. My daughter was mesmerized by the violent kung-fu movie playing which she talked about for a few days after our visit.

If you are ever anywhere within a three to five hour radius of this place I would hope you find time to visit. They make not only some of the best beer in the USA but in the world. Check the website for hours, tours and special events.