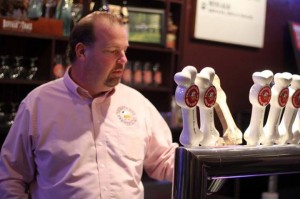 John Najeway is a serious man.

I’ve met a lot of people in the beer industry. From owners and brewmasters to public relations officers and administrative assistants, you can typically count on a light, relaxed tone of voice coupled with a strong desire to impart that their jobs are fun. Craft beer is a lifestyle business, after all. You’re selling more than a product. You’re selling aesthetics, intangibles. When in doubt, play it loose.

By contrast, when you’re greeted by Thirsty Dog Brewing Company‘s owner at the side door to their brewery in Akron, Ohio, you quickly realize this man is different.

Najeway exudes business. It’s obvious that he prizes efficiency, speed and consistency by the way he works a room. His attitude is straightforward, no-nonsense, cutting to the heart of any question put forth, answering it without sentiment or unessential flourish.

There’s a wonderful, almost stereotypically midwestern work-ethic that hangs onto the CEO as he pours samples from the tasting room or nonchalantly taps a barrel to taste a prized aging experiment. It’s at that moment, when you see him hold a beer in his hand, casually watching the light pass through the glass and then handing it to a patron that you notice the pride that accompanies his deliberateness. And with the way Thirsty Dog is growing, the pride is warranted.

A massive expansion project is underway with a conversion of old stables behind the current facility. The gutted shells will keep their brick hulls but will have new life inside as warehousing and brewing operations move into the cathedral-like space. That connotation continues as the property sprawls into a serious of catacombs ripe for stashing away special barrels or creating secretive rooms for private events.

I came to the brewery somewhat aware of Thirsty Dog’s line, having had the Whippet Wheat once or twice during Savannah’s warm summer days. I was shocked to see how extensive their barrel aging program was, with stacks of everything from stouts to saisons maturing and blending with bourbon and chardonnay.

Sharing the product of these barrel-aged variations, you got a true glimpse at the warm, passionate creator behind the hard-work facade. He honestly loves sharing his beer. He intensely watches you as you drink, looking for the slight change in expression that means you’ve experienced something new.

I left with a huge appreciation for what Thirsty Dog has brought to the greater Cleveland area’s craft beer scene, and in Akron in particular. They are true innovators and not content to relax or find much comfort in past successes. With diverse beers like Bernese Barley Wine, Siberian Night Imperial Stout and even sours like Cerasus Dog Flander Red, their breadth is far greater than I previously realized and the aging program shows a commitment to expanding even further into new frontiers.