There is no shortage of very good beer brewed in the state of Florida. Swamp Head, Saint Somewhere, Bold City, Rapp, Intuition, Dunedin Brewing & Mile Marker are just a handful of the 100 + breweries in the sunshine state. There are, however, a select few that really reach out to the beer geek. Those breweries that are producing beer that must be tried. Beers that regularly land in the “top” lists year after year and month after month. Of course Cigar City is the clear leader of this elite group, but there are a couple of much smaller breweries making waves. Cycle Brewing (which is associated with Peg’s Cantina in Gulf Port) brews some highly sought after stouts and sours. There is also The Funky Buddha Lounge down in Boca Raton which is the new “it” brewery, with people making travel plans to pick up the first bottling of their highly sought after Maple Bacon Coffee Porter. I could be wrong, but I feel that in the next few years will will be adding 7venth Sun to the short list of the elite.

Established in 2011, and opening on January 7th, 2012, 7venth Sun Brewery is located in downtown Dunedin, FL. Literally just a block or two from the original Florida micro brewery, Dunedin Brewing. With only a four and a half barrel system Devon Kreps and Justin Stange are patiently brewing small batches focusing on Belgian-style beer, IPAs, spirit barrel-aged beer and oak-aged sour beer. I had been hearing some really good things about their beer over the past year, so Emily and I made a trip to sample some of them on a rain drenched Sunday in late December of 2013. 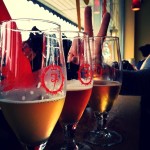 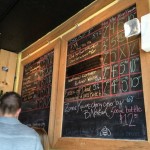 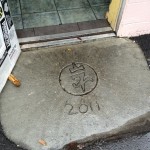 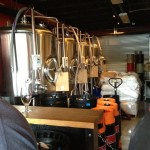 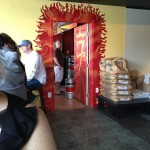 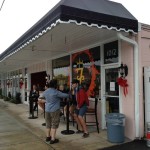 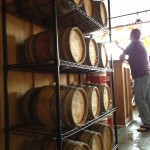 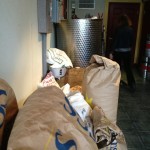 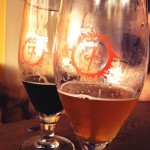 Built into two very small storefronts it’s pretty easy to miss the place. There is a decent amount of parking behind the building which I was grateful to see since the rain was coming down hard and sideways when we arrived! I was really surprised how crowded the bar was on a rainy Sunday. There were actually people sitting outside trying to stay dry while sipping on their beers. It turned out there was a beer bus tour that had arrived un-announced, causing the maybe larger than normal crowd. Kudos to the bartender, sans tardy bar back, who handled himself in an amazing fashion. He was always pleasant and respectful, even as he rushed out the door after the beer tour that was about to leave without settling the tab! I wish I had gotten his name as he deserves a proper shout out!

There honestly isn’t a whole lot to “see” inside the bar/brewery. One storefront houses the bar, grain storage, and small barrel aging racks. Separated by a fiery red door is  the second storefront where the tiny brewery sits. That isn’t a drawback at all however. I love these kind of small local breweries – it almost feels more like being invited into someone’s home. With about ten beers on tap there was plenty to choose from, but since they offer just about all of their beers in $2 -$3 4 oz pours there was no stress about what to try! Between Emily and myself we sampled all of the beers available that day with highlights being the Guilty Pleasure Belgian Porter (w/ tart cherries, cacao & vanilla), Root Down Stout, Mangrove DIPA and the Oaked Sacrificial Lambicus. As will happen with small breweries there were some instances of disappointment as kegs often kick pretty quickly. The first beer I ordered was already gone, and I sadly only got a wee sip of the phenomenal Root Down Stout which Emily’s had for her first round. The keg kicked on my pour!!! Well, such is life. You can’t tick them all!

As the interest in very high quality craft beer keeps growing I foresee the buzz about 7venth Sun growing right along with it. I can easily see some of their beers cracking the beeradvocate top 250 or ratebeer top 50 pretty soon. Which might just lead to some tough descisions about growth and expansion, but in the meantime they seem content producing some small batches of amazing beers for the lucky locals of Dunedin.