It was first announced in July that one of the west coast’s hottest breweries would be coming to Georgia. After a half-year wait, San Diego’s Ballast Point marched into the Peach State armed with kegs of their award winning craft beer.

Unlike most new beer rollouts, this launch included several days of events held in Savannah and other towns not named Atlanta. Savannah was even dispatched its own brewery representative for the week, Chris Marin, who took a brief reprieve from his normal territory in Austin, TX. He hosted tap takeover and featured brewery events throughout our fair city at locations including The Beer Growler, World of Beer, Wild Wing Cafe and The Distillery.

It was at The Distillery that I jumped aboard the Ballast Point express, where six of their beers were available for pours while Marin worked the room, answering questions and telling the story of Ballast Point, which he can sum up in a perfect elevator pitch: “We are all about making great beer, and working with great people.”  The company’s origin story is a common but impressive one in the craft beer world, where humble home brewers gain the confidence and eventually the business savvy to turn their passion into their livelihood.

Out of the dozens of craft breweries based in the San Diego area, Ballast Point has distinguished itself by nurturing a passionate fanbase for their IPAs, winning multiple gold awards at the annual World Beer Cup competition and supporting their own in house laboratory – an obvious sign of their devotion to quality.

Hosting tap takeovers is a regular affair at The Distillery, but general manager Julia Volen felt that Ballast Point’s event afforded additional enthusiasm for one main reason: The beer. “I’ve heard such good things about Sculpin and some of their other brews. I figured if I was curious about their beers then the rest of the beer community would be as well.” 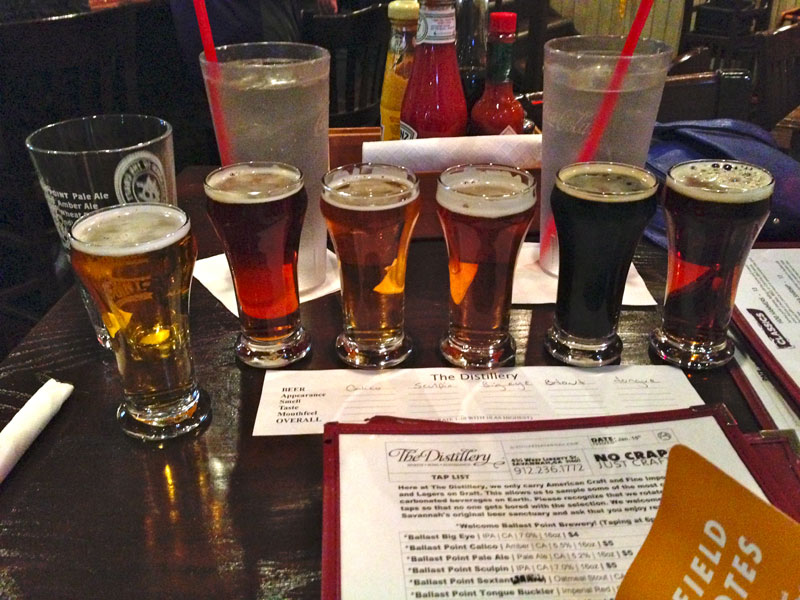 Sculpin does seem to be the beer from Ballast Point with the biggest hype. In the IPA style, it’s a 7% ABV, clean drinking hop missile with minimal malt flavor to get in the way of its fresh, bitter bite. It currently has a score of 98/100 on BeerAdvocate and has achieved a perfect 100 on Rate Beer, two of the leading online beer review websites. If you’re a fan of hops, this is an excellent beer to search out and enjoy. And yes, it’s responsible for one of the aforementioned gold awards.

Calico Amber Ale is another gold award winner that was available at The Distillery’s launch event. Surprisingly hoppy for an amber ale, the bitterness is the foremost quality; but it’s strongly backed by a rich, dry malt profile.

While I knew to expect good things from Ballast Point’s hop-forward ales, I was pleasantly surprised by their Sextant Oatmeal Stout which was served on “nitro.” Dispensing beer carbonated by nitrogen instead of carbon dioxide is a rare find in most bars, and only suitable to certain styles. Serving “nitro” typically results in more delicate bubbles, a thicker head, and a smoother mouthfeel. That was definitely the case with my pour of Sextant, where subtle coffee and chocolate notes laced a very easy to drink, sessionable but still complex stout. Volen was also impressed.

“The Distillery loves having nitro kegs available but there are surprisingly few that we can get. Adding Ballast Point’s Sextant Oatmeal Stout to our small list of available nitro kegs is going to be keeping this brewery on tap a lot more.”

If you’re looking for something more thirst quenching than hoppy or malty, Ballast Point’s Pale Ale is a delicious choice. In the Kolsch style,  it has a honey sweetness with a subdued fruitiness and minimal (but still present) earthy hop note. It’s a natural choice to combat our hot and humid summer months and is a favorite of Marin as well, who referred to it as “our sleeping giant.” In his opinion, “Nothing is better than drinking this in the sand, or on a round of disc golf with the boys.  It’s one of the best hot-weather beers you can ever put into your mouth.”

The turnout for the event at The Distillery was strong and I heard similar reports from Ballast Point’s other stops in town. “Tap takeovers and actually any kind of beer event is beneficial to making a great bonding environment for people who want to talk about beer. It essentially creates friends among beer lovers,” said Volen.