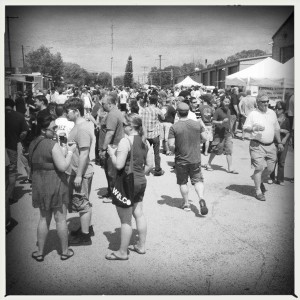 It’s a magical time of the year. While winter has Savannah wrapped up in an a-typical chill, it’s almost the season to stand in long lines, make friends with your neighbors and sample excellent beer.

While Savannah celebrates with its own festival over Labor Day weekend, other southern towns are gearing up for their annual events right now. Within a few short hours from home, you can be whisked away for a full day of tasting rare, sought-after brews from some of the country’s most innovative breweries.

Charleston has Brewvival, a collaborative event hosted at Coast Brewing Company and organized with the Charleston Beer Exchange. 2014 marks the fifth year of this well-regarded festival.

Last year was a muddy affair, with rains coming down heavily at times and limited shelters. However, the beer list was fantastic. One-offs from small local breweries were poured next to altered versions of some of America’s most beloved craft beer staples. Breweries with typically limited regional presences like Jester King also showed up in full effect to the delight of attendees.

Brewvival is also very well organized with shuttle service to the festival to cut down on event parking and to keep revelers off the road. A variety of food trucks and ample restrooms (a festival must) are additional reasons to keep Brewvival on your list.

A bit further away from Savannah is the crown jewel of Tampa’s Beer Week festivities, Hunahpu’s Day at Cigar City Brewing.

The event is named for Cigar City’s rare and intensely sought-after chocolate, chili and spice masterpiece, Hunahpu’s Imperial Stout. Attendees are given the opportunity to buy a small allotment (typically only a bottle or two) as a souvenir from the experience. The entire run of bottles sells out at the event, leaving the open market and traders to set high values for these 22oz bombers of liquid gold.

In addition to tasting the current and previous year’s vintages of Hunahpu’s, festival-goers are also treated to barrel-aged varieties of the famous stout and the rest of Cigar City’s excellent main line and special project beers. The brewery also brings in the best of Florida’s thriving craft brewery scene to attend and pour as well as provide kegs from other well-regarded, hard to find beers. Previous years saw small pours of Dark Lord from Three Floyds and Sexual Chocolate from Foothills dispensed from the tap trucks located around the Cigar City property.

Previously a free event with charges for tastings, this year Hunahpu’s Day changed to a more typical beer festival admission pricing. Cigar City’s membership society, El Catador Club got first dibs on tickets, leaving the remainder to sell out online in around an hour. If you missed out this year, there’s a good chance there will be tickets available on the secondary market if you look hard enough (and are willing to pay scalper prices).

If you’re looking for something more convenient and accessible, there always seems to be a beer festival of some kind happening in Atlanta. Their Winter Beer Fest was held last weekend, but spring and summer events are already on the calendar.

April 5 is the Hogs and Hops festival held at Masquerade Music Park. Tickets are $40 in advance and include unlimited beer samples and five food tickets. VIP passes are a bit more at $65 but include unlimited food and early access. While the beer list won’t be as exotic as Hunahpu’s Day or Brewvival, the additional focus on music and barbecue still make for a fun day with beer fans.

While getting out of town to attend these festivals is a lot of fun, it’s also important to support your local beer fest. So remember when planning your schedule to save room Labor Day weekend for the Savannah Craft Brew Fest held on Hutchinson Island.