Getting Back to “Just Beer” 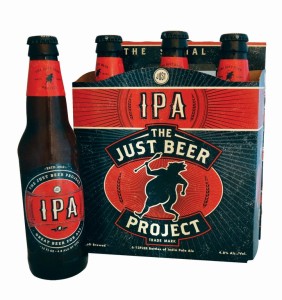 “Every action has an equal and opposite reaction.” That is how brand manager Rob Kreszswick describes the genesis of The Just Beer Project, a new craft beer company based in Vermont. With the increasing push to extremes in the craft beer world – be it more hops, unexpected flavor combinations or higher alcohol content – this new brewery is bucking larger trends by instead focusing on straightforward session ales.

The term “session beer” is used to describe brews with low alcohol by volume (ABV), typically less than 5% alcohol. These beers are often more balanced than their aggressive counterparts, seeking to provide refreshment alongside milder hop profiles and smooth malt bases. One of the main benefits of this style is that it allows the drinker to have several beers without getting intoxicated.

In the past, session beers have focused on very light styles such as cream ales. But with the diversity in today’s vast craft beer selection combined with a more savvy consumer, full flavor can’t be sacrificed for the benefit of lower alcohol.

“American palates have developed toward more flavor, and drinkers want the experience of craft beer,” says Kreszswick, who spent 13 years working with Boston Beer Company before stepping in at Alchemy & Science, The Just Beer Project’s parent company (which is coincidentally an independently-run subsidiary of Boston Beer Company). Drinking beers from this new brand allows dedicated fans of smaller breweries to enjoy a lower alcohol drink while still “keeping the badge of craft” as he puts it.

In addition to wooing seasoned craft beer drinkers, The Just Beer Project also hopes to attract newer craft beer buyers. With so many options on store shelves, it hopes to define itself by being “less confusing to buyers” in Kreszswick’s words, adding that people like the simplicity in what his company offers.

Kreszswick quoted a statistic that less than 10% of craft beer drinkers only drink craft beer. The other ninety percent still imbibe in the occasional mass-market American lager or import. In many instances, that divergence into ABInBev or MillerCoors territory comes at social gatherings, where having more than one beer while congregating is the norm.

Sociability and sessionability go hand in hand. While six, seven, eight or higher percentage ABV beers are becoming more commonplace, the idea of having more than a couple of beers while occupying a barstool or watching a ballgame with friends is becoming less likely.  Social occasions continue to be dominated by mass-market domestics because alcohol content limits quantity.

When it was time to expand distribution beyond its local region, The Just Beer Project saw Georgia as a primary target. Their Anytime IPA is in Atlanta now and the plan is for it to arrive in Savannah by April. The brewery was keen on finding areas where craft beer consumption is expanding and Georgia has that statistic, as well as a large base of the ideal drinker demographic, men and women between 25 and 45. In addition to being in local bottle shops, Anytime IPA should also see large chain support from Wal-Mart and Kroger, making it easy to find after its local release.

Anytime IPA is described by Kreszswick as “Everything you want in an IPA.” The beer is heavily dry hopped to give off a full flora aroma and includes citra, cascade and simcoe varieties. There is the expected IPA bitterness up front, but it mellows into a sweet but clean malty finish. True to Just Beer’s mission, it clocks in at 4.6% ABV.

The Just Beer Project is making session beers its sole focus; but it’s possible that one of your favorite craft breweries already has a low ABV beverage available in addition to their more traditional or niche offerings.

Athens, Georgia based Terrapin Brewing Co.’s Recreation Ale has been out for a while, but the twelve packs have only recently begun showing up in Savannah. Marketed toward those who engage in active outdoorsy lifestyles, this easy-to-drink  pale ale has bright lemon and pine notes with a mild cracker dryness and tinge of sweetness at the finish. The 4.7% ABV means your kayaking won’t be slowed down by impaired reflexes.

Founders’ All Day IPA also comes in at exactly 4.7% ABV, but these two beers don’t have much else in common. Clean and crisp with a huge citrus hop aroma, this beer gives you everything you love about traditional IPAs minus the extra alcohol.

Lagunitas’ DayTime is another below 5% American IPA that combines a subtle grassiness with orange peel and pale malts along with  just enough effervescent carbonation to make it an easy drinker.

Stone is revered for its series of gigantic, overly hopped IPAs, but its Levitation Ale is a meager 4.4% ABV in the unassuming amber ale style. If you’re less of a hop-head, this is a great choice for a session beer as it relies just as much on caramel malts as its spicy, floral hops for a surprisingly big flavor.

I love the idea of session ales being available in cans for the ease of portability. Nobody does cans like San Francisco’s 21st Amendment, and its Bitter American Pale Ale is as stylish as it is tasty. The base beer has a good amount of sweetness and citrus character, but it’s quickly taken by a tart grapefruit hop bite.

It seems odd that a mild, low-alcohol beer would ever be considered extreme; but when compared to the rest of the market, it’s definitely a reaction to the imperial stouts, double IPAs and other big beers that have come to the fore. While the journey of a craft beer drinker does tend to push tastes to the limits of flavor and style, it’s nice that The Just Beer Project and many other brands see the importance of getting back to the basics of “just beer” that can be consumed any time.