Meet Exit Strategy. Their contribution to craft beer’s continual evolution and assimilation into the mainstream has a nostalgic, fun and decidedly southern twist.

Forget “go cups” or “travelers” of alcohol – think bigger. Think creamier. Think about strolling down the street, not with a plastic cup of sloshing brew, but with a portable container of frozen custard beer.

That’s right. In a haute cuisine twist, beer has been transformed into frozen custard, served like an old school ice cream push pop.

Seeing open containers of alcohol on the street is a common sight at Brew / Drink / Run headquarters in Savannah, GA. We’re one of a handful of towns in the country where you can legally walk outside a bar and head down the block with a fresh pour. 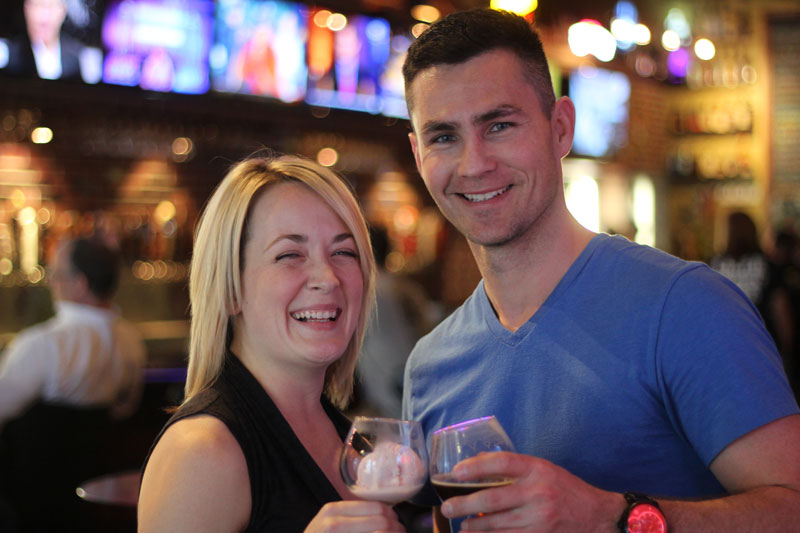 Knowing that background, it makes sense that Savannah would be the birthplace of a more upscale take on portable refreshment. This marriage of frozen treat and adult beverage is the unique vision of the Savannah company Exit Strategy. They start with selecting a world class craft beer, and then build a custard recipe that plays off of that specific brew’s rich flavor combinations. Then, they infuse the beer into the custard and create a frozen concoction which may be the most complex, delicious and decidedly adult take on ice cream you’ve ever experienced.

Founder Lisa Smith was on a beer pilgrimage when she found the inspiration to merge craft beer with ice cream.  “I’ve been a craft beer fan for many years and this was an idea that came from a road trip with my sister visiting breweries.” When the sisters remarked upon the proximity of one brewery with a local ice cream shop, the concept was born. Two great treats – why shouldn’t they go together?

The response has been enthusiastic from local restaurants and retailers alike. You can grab Exit Strategy’s frozen custard in push pop form at Savannah-area craft beer-friendly venues like Green Truck and The Distillery, and even buy pints from a dedicated cooler at The Beer Growler. Mixologists at restaurants like Bar Food are using the custards for crafting floats, and mixing them in with traditional drinks like White Russians.

The frozen custard clocks in at a minuscule half-percent alcohol – a bonus if you’re looking to find this in more locations. The low alcohol percentage allows it to be sold by stores where you wouldn’t normally be able to buy beer, like the Sylvester & Co. boutique on Broughton Street.

The custard differs a bit from traditional ice cream, and not just because it’s made with beer. “Our custard is an egg based ice cream. Frozen custard was developed as something with a smoother texture and stays colder longer,” says Smith.

Sales Director Grafton Kent adds, “Another reason for the custard is ice cream has a lot of air content and custard has almost zero. It’s a denser product that has a longer shelf life.”

Smith and Kent love all styles of beer, and that’s evident in the variety of flavors offered for sale. You won’t find any watered-down lagers or blase browns in the mix. Instead, Smith, the recipe creator, chose complex beers like Allagash Tripel and Young’s Chocolate Stout as base beers for their Belgian Tripel and Chocolate Stout custards, respectively. They’ve even teamed with local brewery Southbound on a co-labeled Coffee Stout based on their recent “Moonlight Drive” release.

Exit Strategy’s most popular flavor is Raspberry Lambic, which uses the tart profile of Lindeman’s Framboise as a platform for expanding into sweeter fruit flavors without losing the integrity of the spontaneously fermented, often lip-puckering sour Belgian ale. They’ve found a way to accentuate the refreshing qualities and minimize the harsher notes for a tasty treat that’s the perfect alternative to a traditional digestif.

“It’s easier to understand fruit than some other beer styles” said Smith. “It translates really well for people who may think they’re not into craft beer. But there’s a craft beer for everyone, they just haven’t found it yet.”

Smith and Kent are thankful to the Savannah community for helping their product to grow.

“It’s been tremendous working with the local craft beer and restaurant community,” says Smith. “Everyone has been so supportive, and that has been priceless. We got such a good response right off the bat. People love our products.”

So if you really want to impress fellow beer fans at your next soiree, do more than bring good beer. Bring something that’s just as fun as it is tasty – craft beer frozen custard.