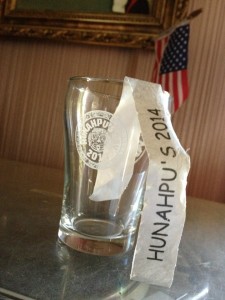 I’m saddened and shocked by the events that took place at Hunahpu’s Day 2014. There have been no shortage of blog posts and articles written about how the festival ended, some first hand and some pieced together from across the country. I will not go into too much detail about our day, honestly Lee and Raymond sum it all up quite well. Our group of four had a great time and were stunned to learn about how things ended on Saturday night. What’s been eating at me is the HOW and WHY this all had to happen.

A lot of anger and venom has been aimed at Cigar City Brewing (and owner/CEO Joey Redner in particular) for the issues, and I do believe they made some major mistakes. In their defense, however, they did make many efforts to improve the event from the previous year. Hindsight is always 20/20 and obviously they should have hired a professional event staff to run the event as opposed to brewery staff and volunteers. In addition, the lack of clearly defined lines to wait in created a lot of line cutting, both intentional and not. The simple fact is they did not prepare for the worst and it showed. Apparently a large amount of counterfeit tickets also contributed to the problems. Again, hindsight tells us that something more secure than a ticket printed from home makes more sense. It was way too easy for someone to post about having an extra ticket for sale at face value, then sell 100 copies of that ticket to the beer fans who responded. But at the end of the day if you really want to know what killed Hunahph’s Day we all need to take a long hard look in the mirror.

Easy now, there is no need to turn the torches and pitchforks towards me. Give me a chance to explain. I do believe there were more respectful and generous beer fans in attendance that day than not, but the fact of the matter is the craft beer/trading culture is starting to get out of hand! There were a lot of complaints about long lines for beer, and after waiting 2+ hours to get in the gate that would infuriate me too, but the real problems revolved around the bottle sales. It is probably well known that the original 3500 ticket holders were guaranteed the opportunity to buy up to 3 bottles of Hunahphu’s Stout. At 4:00 any leftover bottles were to be sold by the case, first come first served. At this point the perfect storm of alcohol consumption, greed and crowd created frenzy took over. The people obsessed with buying whole cases, presumably to trade for other rare beer or to sell for profit, began clogging up the bottle sale location long before 4:00 (this is where clear lines and barriers would have been helpful). Apparently these folks were not budging or willing to allow those just wanting to buy their 3 bottles to pass ahead. I heard first hand accounts of people being kicked, shoved and punched by these frantic hoarders/traders because they thought they were cutting ahead to get a precious case! Honestly, when did our beautiful hobby sink so low as to behave like this? Is trading for that bottle of Dark Lord or Cantillon really that important? This kind of behavior is no better than that of the idiots who fight over flat screen TVs on Black Friday! You don’t have to agree with my opinion, but the trade forum on beeradvocate.com was blowing up with trade offers for both Hunahpu’s and the even rarer Double-Barrel Hunahpu’s by Saturday night. In addition to that people actually had the nerve to show up at the CCB tap room trying to sell Huna bottles for more than face value the very next day!!! Our greed and obsession is what killed Hunahpu’s Day, plain and simple.

I believe that Cigar City is going above and beyond to make this right. Not only are they refunding all of the tickets purchased, whether you got your bottles or not, but they are also brewing another batch of the beer for those who missed out. Sadly, I’m sure there will be people out there who will try to swindle CCB out of more Huna claiming to had not gotten any (and since no one ever took my wrist band after I bought my bottles I could theoretically do the same, but why would I want to?).

It is time for a bit of a reality check for the craft beer culture. If we are not careful we will love it to death.