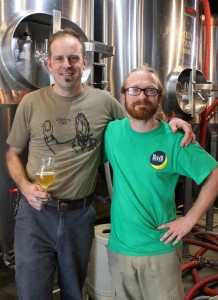 John Pinkerton was happy to celebrate the end of another successful Craft Brewers Conference. As a board member of the conference hosts, the Brewers Association, he spent the preceding days running panels, introducing speakers, attending meetings and networking among the nearly 9,000 attendees to the 2014 event celebrating all things craft beer.

“I have Scottish ancestry, so i’ve always seen it as the gathering of the clans,” is how Pinkerton romantically described the occasion while back home in Savannah, relaxing in the beer garden at Moon River Brewing Co., his pub on Bay Street.  “These are my people.”

The conference concluded with the announcement of winners in the World Beer Cup competition. Pinkerton has entered Moon River beers in numerous years and even served as a judge since starting the brewery in 1999. It’s a truly international competition, striving to recognize the best beers according to established style guidelines and includes participants and judges from around the globe.

Breweries were limited to submitting four bottles of beer to the competition for judging. Moon River sent Apparition, their flagship pale ale, Marmota, a Belgian pale ale, Belly Washer, a golden ale and The Bomb, a dry Irish stout. While he had high hopes for several of the beers, he wasn’t so sure about sending The Bomb.

“I didn’t think it even had a chance. but Adam really wanted to enter it  so i said okay.” It seems brewer Adam Mathews was on to something.

The key to winning beer competitions is to match your beer’s appearance, aroma, mouthfeel and taste to predetermined official style guidelines. For a Classic Irish-style Dry Stout, the guidelines call for a low ABV beer with an “emphasis of coffee-like roasted barley.” Including The Bomb, there were 36 beers in this category at the 2014 World Beer Cup that went through a series of elimination rounds, finally yielding three final beers which would be awarded golden, silver and bronze awards.

Pinkerton describes Moon River’s take on the style to have a “tight, clean roastiness” using a lighter colored roasted barley along with a base malt and UK Target hops meant to “sting just a little bit.”

As for the awards ceremony, Pinkerton reminisced it was “just me and 4,000 of my closest friends.” The stouts were awarded near the end of the program and he was drinking beers and socializing with those close friends when “all of a sudden people are screaming and pulling on me. Everyone was freaking out. I could see out of the corner of my eye ‘Moon River’ on the screen and it was a big thrill.”

The beer garden at Moon River

Savannahians looking to get a taste of the city’s first-ever gold winning World Beer Cup brew will have to wait a week or two as the brewery is busy getting a fresh batch prepared for their taps.

While Pinkerton is a leader on the national craft beer stage, he’s also active in Georgia’s emerging brewing renaissance. Not missing a beat, he transitioned from the Craft Brewers Conference to days later hosting a state-level symposium for the Georgia Craft Brewers Guild, which he serves as president.

Depending on how you look at the numbers, Georgia has “tripled or quadrupled its number of breweries since 2010” said Pinkerton. In addition to the Georgia Guild symposium, which featured workshops on how to transition from homebrewing to opening a commercial brewery, the organization also put together a beer festival featuring all Georgia breweries, a feat which would have been unthinkable a few years ago. More than 20 breweries participated in the fest.

You don’t have to work for a brewery or be in the brewing industry to be a member of the Georgia Craft Brewers Guild. They offer an “Enthusiast Membership” that allows you to show your support for local beer. Your donation goes toward helping the Guild promote state breweries and support their agenda of making Georgia a premier destination for craft beer. Find out more at georgiacraftbrewersguild.org.