When it comes to scoring, ranking or otherwise evaluating something as subjective as the complex flavors of beer, top 10 lists are usually worthless. A drink that is one man’s holy grail is another’s drain pour. But as I started the task of assembling my personal favorites beers from the last few years, one brewery kept coming up: Westbrook.

Located in Mt Pleasant South Carolina, Westbrook Brewing Co. is a short drive from downtown Savannah. Luckily, its production and distribution gains have made finding Westbrook bottles at local store shelves and bar taps much easier, allowing you to save money on gas and spend those savings on more beer.

It’s no secret among local beer aficionados that Westbrook produces a quality product. Its IPA (the standard-bearing style when judging most American breweries) is extremely well-received and the White Thai (a refreshing witbier brewed with lemongrass and ginger) has become one of my year-round go-to beers. But it seems 2013 is the year the rest of the world discovered the brewery, and excitement for what comes next is reaching greater heights. 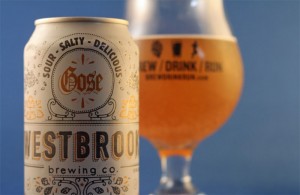 Westbrook received a lot of well-deserved press in 2013 year-end best-of lists for its “Gose.” The sour wheat beer style was almost extinct when a few innovative breweries began to tinker with the format with varying degrees of success. Westbrook’s “Gose” is low in ABV (alcohol by volume), tangy and salty. An acquired taste for sure, but it makes for an interesting thirst quencher, and seems designed specifically to combat our local heat. For most breweries, crafting a gose would be seen as an experimental niche beer, limited in availability to appease a few interested patrons. In stark contrast, Westbrook began canning it and making it a member of its regularly rotating offerings. Gutsy decisions like these make beer fans love Westbrook.

“One Claw” was released in March 2013 and combines malted rye with a variety of hops to produce a fresh, grassy and citrusy flavor with a powerful and welcome bitterness at the finish. Also available in cans, it’s a rare beer that’s just as practical to throw in a cooler for camping or boating as well as sipping from a tulip glass at an upscale tasting event. Although a new release, Westbrook has already elevated it to year-round availability status.

2013 saw the further development of Westbrook’s well-regarded “Bearded Farmer” series with “Thomas,” “McCollough” and “Taylor” honoring local farmers with uniquely flavored saisons. The hops, malts and yeast strains are tweaked with each iteration, creating a new but related product, ripe for side-by-side tastings.

You can’t talk about Westbrook without mentioning “Mexican Cake.” It was re-released in limited quantities to the delight of craft beer drinkers who crave a bit of spice with their stout. This is a serious beer at 10.5% ABV and aged with cocoa nibs, vanilla beans, cinnamon sticks and fresh habanero peppers. The taste is phenomenal, and while this year’s seemed slightly different from previous versions, those subtle changes may have made an amazing beer even better.

“Citrus Ninja Exchange” came back for 2013, and when bottles showed up in Savannah, they quickly disappeared. The double IPA is a hoppy grapefruit bomb backed up with much more subtle sweet orange and lemon flavors and finishing smooth with a slight tartness. It currently has an “outstanding” 94/100 rating on BeerAdvocate.com, which from those highbrow reviewers is no small feat.

Coming in just at the end of last year was Westbrook’s 3rd anniversary beer, “Orange Bliss.” The imperial stout lives up to its name with bushel loads of deep orange flavor, enveloped with sweet chocolate and roasted malts. That roastiness evokes coffee and burned sugar, the perfect combination to craft the beer equivalent of an orange truffle.

While I’ve taken the time to mention my favorite Westbrook’s 2013 offerings in depth, I’ve barely scratched the surface of their output. Other standouts from the brewery include “Udderly Milk Stout” (a low ABV, easy to drink milk stout), “Tripel Magee” (a traditional, boozy Belgian tripel) and “Weisse Weisse Baby” (their take on another often ignored style, the Berliner Weissbier).

Like the rest of the beer world, I’m eagerly anticipating what’s next from Westbrook Brewing Co., while at the same time, happy to look back on these amazing beers. Of course, having a few “Mexican Cakes” aging in my cellar makes the wait all the sweeter.