An old Savannah favorite is bringing something new to midtown, and craft beer fans should take notice.

Ben’s Neighborhood Grill has been serving up some of Savannah’s best burgers and chopped fried chicken sandwiches for the last 53 years. Its midtown location on Hodgson Memorial between Stephenson and Eisenhower brings in a loyal lunch crowd that fills the booths for friendly service and food made with quality, locally-sourced ingredients.

Over the past five decades, Ben’s has largely kept things status quo. Yes, the restaurant has moved a few times and the ownership has changed hands. And occasionally, the menu would see a new item or two. But as the old saying goes: “Don’t mess with success.”

Those regular patrons received a surprise a few weeks ago, when Ben’s rebranded with a new name, Ben’s Neighborhood Grill & Tap. As that new name implies, craft beer was added to the offerings along with wine.

An artistic remodel accompanied the name change and the restaurant’s newly refined image is defined by the large, shiny zinc bar that separates the dining room from the kitchen. That bar is home to twelve taps that are dedicated exclusively to craft beer brands such as Dogfish Head, Green Flash and local brewery Southbound. For those who live and work in this part of town, the options for quality craft beer have been extremely limited. But Ben’s has virtually changed that overnight by going all-in on the new venture with outstanding initial selections ranging from easy sipping wheat beers to challenging double IPAs. The staff pours full 16oz pints, regardless of style, scarcity or alcohol content, at incredibly fair prices. 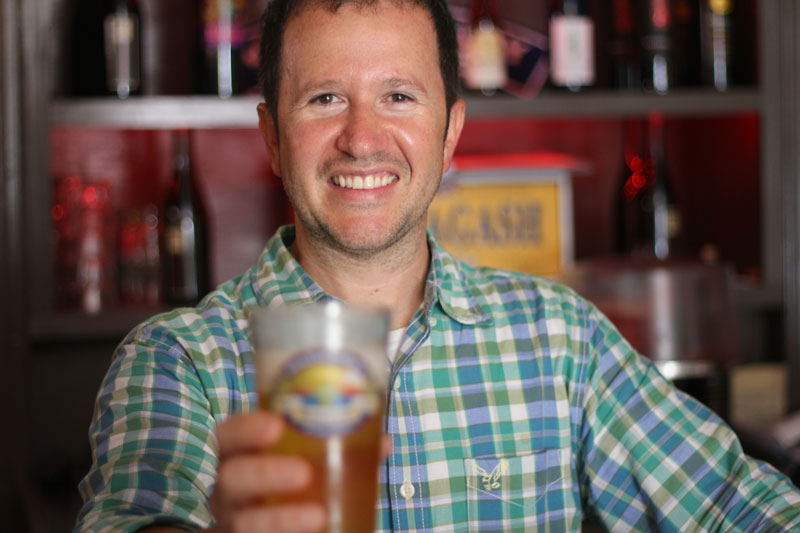 Nick Lambros has served as Ben’s owner and steward for the last twenty years. While keeping the famous burgers on the menu, during his tenure he’s also introduced touchstones from his personal heritage like a Greek salad, gyros and even a Greek burger based on a recipe from his aunt. The latest move to expand beverage options was another logical step to merge two of his long-time loves, food and craft beer, together in his restaurant. “The constant thirst for trying new beers is one of the reasons for this. I wanted to further explore my passion.”

The reaction from the regulars has been overwhelmingly positive, although Lambros said, “They’re shocked. The first time they walk back in, they walk back out because they think they’re in the wrong spot. The next time they come in, they get a beer with their meal. Everyone has been very enthusiastic.” The dining room’s physical remodel was a top-to-bottom affair with a new tin ceiling, fresh paint, black and white photography and Edison bulbs hanging over the tables. “We wanted to make an environment that was conducive for people to want to hang out,” said Lambros.

Offering beer and wine has inspired another change at Ben’s, as the restaurant has expanded its hours to serve more than just those looking for a bite on their lunch break. Formerly only open from 11AM until 3:30PM, you can now visit during more traditional “pub hours” from 11AM until the last revelers are ready to leave, typically around 11PM on weekdays or midnight on weekends.

Lambros’ ultimate goal is to make Ben’s a pub in the original European tradition. In his words, “A pub to me is a place that is homey, small, quaint and a part of the neighborhood like what you see in Ireland or England where a lot of friends share together.” He hopes it will be a place for Savannahians to gather over a pint, talk with their neighbors about food, politics or the occasional big game, be that the USA competing in the World Cup or UGA football in the fall.

Being a family-friendly location, another key tenant of a European-style pub, the most likely images playing on the dining room’s handful of screens will be old black and white movies or cartoons evoking days gone by with the sound muted for ambience.  “I’m a kid at heart, so if it’s Shaun the Sheep or Three Stooges, we’ll put on something that doesn’t require sound and is easy enough to follow along,” said Lambros, who is also a father. “It’s not a bar and not just a restaurant. A pub is the perfect synthesis. We’re the only true pub in the area and an oasis in midtown.”

While the Ben’s in the name was originally tied to a former owner, the current referential character is Benjamin Franklin, whose visage and famous kite can be seen in the new branding for the restaurant. Franklin was himself a brewer and noted devotee of beer, which ties back to the restaurant’s new emphasis. “The craft brewing scene is now, for the first time in 200 years, as large as it was during the Revolutionary period,” said Lambros. “So, I thought it was fitting to have Benjamin Franklin be our mascot.”

The popular phrase “Beer is proof that God loves us and wants us to be happy” is attributed to Franklin, and although it’s a misquote (he was actually talking about wine), there is definitely joy in knowing that owners like Lambros are trying to keep the traditional pub spirit of our forefathers alive for today’s generation.