Drink in the History at Savannah’s Crystal Beer Parlor

John Nichols and Ben Mammina are proud of what they’re accomplishing at the Crystal Beer Parlor.

The owner and bar manager, respectively, are breathing new life into Savannah’s second oldest restaurant by emphasizing delicious craft beers alongside what Nichols describes as “American fare with a bit of a twist.” All the while, the team works to remain true to the aesthetic that has kept the Crystal Beer Parlor a local favorite for over 80 years.

Unfortunately, the hamburgers are no longer thirty cents each like they were in 1933 when the Crystal Beer Parlor served as a rough-and-tumble men’s club. However, those juicy burgers are still on the menu, as is the cold draft beer you’d expect from the businesses’ name. One significant difference between then and now is the diversity of beer that is available.

Mammina joined the Crystal Beer Parlor team as a bartender and worked his way up to bar manager, where he sought to revitalize the tap list with exciting options from around the country. “In terms of forecasting the menu, I try to stay on top of trends, but it’s also a matter of what I like,” said Mammina. 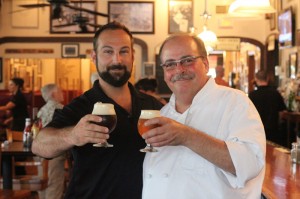 He’s made a point of devoting several handles to beers brewed within Georgia’s state lines and that includes many from right here in Savannah. Supporting those local breweries is important to the Mammina. “We have great beers at our fingertips, with the same if not better quality available right here [in Georgia],” said Mammina. He’s particularly excited about beers coming from Decatur’s Belgian-influenced Three Taverns and Athens’ Creature Comforts breweries.

Alongside those fresh new selections, the bar also features a small grouping of heritage ales and lagers that they refer to as the “Beers of Our Fathers.” That set includes names you may not have heard recently like Genesee Cream Ale, Iron City, Lone Star and Dixie.

Owner Nichols applauds Mammina’s efforts and supports his choices. “Ben’s done an amazing job. I hear people all the time tell me we have the best tap list in Savannah. He’s constantly researching new beers, tap equipment and he keeps it fresh” said Nichols.

The Crystal Beer Parlor held six events during Savannah Craft Beer Week, hosting tap takeovers and special tastings with the likes of Samuel Adams, Highland and Eagle Creek. The Victory Brewing Co. night in particular was a big success. “It was huge. We had prizes and we were packed to the gills by 7:30 that night,” recalled Mammina.

But you don’t have to wait for Craft Beer Week to find special beers on tap. On a recent Wednesday afternoon, the 26 available kegs included a hard-to-find sour peach weiss, a spicy saison, a pumpkin stout and sweet brown ale. That variety is what makes the Crystal Beer Parlor an outstanding option for a drink in downtown Savannah.

However, even with the strong emphasis on craft beer, the Crystal Beer Parlor maintains its commitment to being a family-friendly restaurant first. The beer-complementing crab stew, fries, onion rings, and, of course, hamburgers have been on the menu since the beginning, while the adventurous avocado hummus is a much newer addition.

“We are a restaurant with a bar – not the other way around. You can come here and have some of the newest beers and still feed the family” said Nichols.

The Crystal Beer Parlor is a true slice of Savannah history. The archival photographs on the wall and vintage menu billboards tell of the venue’s past, but the efforts of Nichols and Mammina are setting a fresh table for the restaurant’s future.