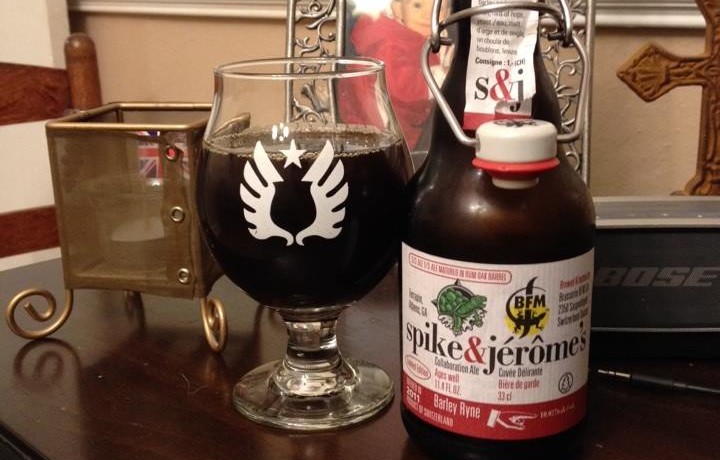 BFM / Terrapin Spike & Jérôme’s Cuvée Délirante – 2011 Barley Ryne is an English Barleywine, brewed with rye malt, this is 2/3 ale and 1/3 ale aged in rum oak barrels. Brewed at the BFM in Saignelégier, Switzerland. This was bottled in 2011 and the bottle claims this ages well. Most of the beer community begs to differ however.

I must admit that I never had this fresh, but I did get a chance to try Jérôme & Spike’s Collaboration Ale a little closer to fresh. It was a similar recipe to this beer, but it used bourbon barrels instead of rum and was brewed at Terrapin in Athens, GA. So first things first, this was totally flat. there is no guarantees when ageing beer, but when the bottle tells you it ages well you expect it to still be at least a little carbonated after 3 – 4 years! The aroma isn’t all that bad, some raisins and molasses, a surprising hint of some rum vanilla in the very background. A bit of sourness as well, which I kind of think was not intended and is a by product of the aging. Oh yeah, this has soured up a lot. I can see why people are dumping this down the drain, if you are expecting a barleywine and get something that tastes like a Flanders Oud Bruin you’re going to be disappointed. I happen to like sour beers that taste kind of like this, I am actually enjoying this beer even though it’s a mess of a barleywine. Tasting some sour dark fruits/lacto like sourness, hints of caramel and molasses in the taste.

According to our friend Matt (he opened a bottle of this in 2013) and the earliest beer reviews I could find, my experience is shockingly not very different. At this point it is what it is… and I kind of like it. It is hard to say if this is what the brewers wanted you to be experiencing, but for me this is an enjoyable “failure”. 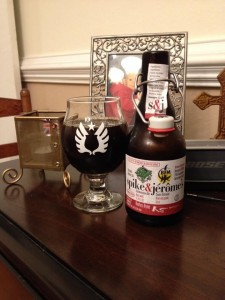