This beer pours a perfect black color with a nice tan head. Big coffee, cinnamon and chili pepper spice on the nose. The taste is much the same as the aroma. Coffee and chocolate hit the palate first, followed by some strong cinnamon. An excellent amount of pepper burn lingers into the finish and aftertaste along with more dry roasted coffee. The 12% ABV warms the gut after about half a snifter.

This is a complex and delicious stout as it is, but I also think has some huge barrel aging potential. Well deserving of it’s bronze medal in the herbed/spiced beer category at the 2014 Great American Beer Festival! 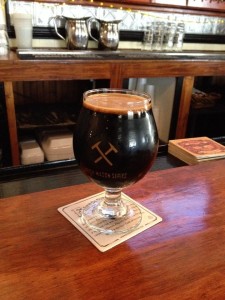