After the roaring success of last years Cinnamon Roll’d W-n-B, Terrapin has created a “french toast” variant this year. Terrapin French Toasted W-n-B Coffee Oatmeal Imperial Stout was just as highly anticipated and was hunted down with the same fanaticism as last years variant.

The aroma at first is almost identical to Wake-n-Bake, lots and lots of Jittery Joe’s coffee upfront. After about fifteen minutes of warming some welcomed maple syrup comes out in the nose. The taste also starts a bit too much like the regular version of this stout, which is not necessarily a bad thing, it it one of my favorite seasonal Imperial Coffee Stouts! As with the nose, after a few minutes of warming the beer opens up revealing the added flavors. Getting some of the maple syrup, a little vanilla and cinnamon as well. Maybe not being different enough from the base beer is a slight disappointment, but overall this is one fantastic beer.

I would also note that I first had this from a fresh filled growler (Thanks Raymond!), then a few days later opened one of my bottles to refresh my memory and get a good picture for this review. I found the drinking experiences pretty different. The bottled version had more of the special elements, more maple syrup for sure. Oddly though I thought the growler (draft) version was better overall, it just tasted better even though it seemed less like a variant at all. 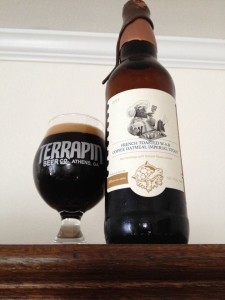