A friend of mine recently turned 40 and as these birthdays go, he decided to do something special to mark the passing of that big number. Because he loves beer and he loves running, he decided to celebrate with a Beer Mile, inviting all to run the now popular four laps, four beers.

I’ve watched the video, as many of you probably have, of James Nielson running a sub five-minute beer mile. In the video he discusses his training methodology and strategy. After watching the video I resolved to not bother with any preparation and just show up. Why would I practice stretching my stomach and worrying about CO2 intake? Really how hard could this thing be, it’s four lousy beers and a mile?

The only thing I researched in preparation for my run was the type of beer. The top five beers were all macro beers, nothing surprising there, what was curious was a lot of talk about the temperature of the beer. Too hot and beer is foamy, too cold and it’s harder to guzzle. In the end temperature wasn’t a factor as it was super cold the day of the run and there was no way to keep it at optimal temperature. Ultimately I chose Miller High Life. In my mind this was a serious decision because if I was going to do this I needed to at least have a new unique check in on Untappd. The High Life was the only beer on the top five I have never checked into and I might as well make another tick on the list. My research and training done, I was ready to step onto the track.

The party hosts set up pretty serious looking race. There was a .25 mile around the block loop. They recruited a few friends, decked them out in safety orange jackets, and placed them at the block corners to watch for traffic and runner “incidents.” There were finisher t-shirts and trophies for both the male and female first place finishers. While the set up was serious many of the runners were not. There were several costumes and a lot of goofing off. For the record there were maybe twenty of us, mostly men, because men are stupid, and only two women.

After a reminder of the Official Beer Mile rules, we were off. That first beer was tough to get down. I was never much of a beer chugger in the first place and I think I shook the beer up some on the walk over to the party. I’ll tell you now, lots of carbonation and running do not mix. The first stretch of the lap was the toughest, all that carbonation made things uncomfortable. That said at the end of lap one I was feeling OK.

Lap two was just the same, the beer took a little longer to get down but the run was a run, if a touch gassy.

Lap three was terrible. As I rounded the final corner of lap two and saw the beer table I started to psych myself out. I did not want to drink another beer. That third beer took a while to get down. I was miserable. I didn’t feel well and I spent the entire third lap thinking about that next beer.

That fourth beer was still tough to get down but it was the last one so I was able to just get through it. That last lap I had nothing left, I was slow and plodding with no kick to finish strong. But I had to finish as I was counting The Beer Mile as my mile for my running streak.

Finish I did. In fact I was pretty pleased with my 10:04 time. Not a world record by any stretch but considering an eight-minute mile is a pretty good one for me and I managed to drink four beers, ten minutes felt like an accomplishment. I didn’t throw up either, always a good sign. All in all it was an experience, perhaps one of the stupidest things I’ve ever done. I have no inclination to give it another try and I’m glad I didn’t have to pay for it this time around. That said I’m not sorry I did it ,another running bucket list thing to check off, I guess. 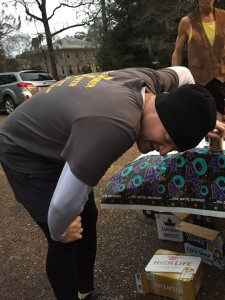