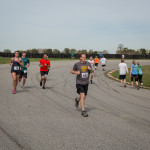 For the longest time I’ve thought Savannah needed some sort of big beer and running event like a race followed by a craft beer festival. Brew/Drink/Run even poked around to see how to start a event. Fortunately, Craft Brew Races saved us a lot of work and brought their 5K and beer festival series to Savannah this year.

Craft Brew Races started as five events spread out around New England. They have since grown to ten events around the country. Savannah was lucky to be chosen as a location for their expansion and we’re all better for it. The Craft Brew Race series format consists of a timed 5K run followed by a three-hour craft beer festival.

The inaugural Savannah Craft Brew Run was a lot of fun. Both the run and the festival took place across the river from Savannah on Hutchison Island. This is the start location for several Savannah runs and the location of Savannah Trade Center where the Savannah Craft Brew Festival is held. The location for both the run and festival had an infrastructure and history making this a well organized event and familiar territory for locals. 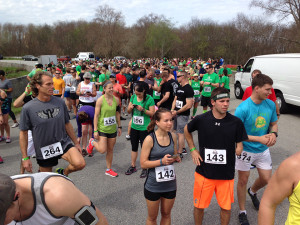 Photograph by the author

Tickets for the Festival can be purchased separately from the race. Not everyone at the event did both but there was still a large turnout for the race. The field was made up of just over 500 runners. What I loved about this run was how different it felt from the usual 5K. There were several hard-core runners there, people with game faces on ready to fly. There were also plenty of people who were just there for the ride and to have some fun. For some, the beer festival started early and a few cans were seen being passed around. You can read my story on the Beer Mile to see what I think of actually mixing beer and running.

The run includes a costume contest and since the race was being held the weekend before St. Patrick’s Day (a huge deal here in Savannah) there were several kilts and a lot of green to be seen. All this meant that the run felt lighter than most 5Ks I’ve done, very relaxed. 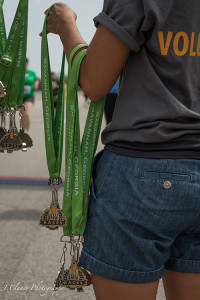 The route was an out and back along a golf course. It was not the easiest run I’ve done. There were some small hills and it was a typical Savannah hot and humid day making the run a challenge but it was still a pretty fast run. The lead runner maintained a clean 6:00 minute mile. As with most races you could register as a team, many of which were sponsored by local breweries.

The Brew/Drink/Run team fared pretty well. BDR team member Matt took the second place over all finish. Matt’s strong race along with solid runs from Matt’s wife Nicole and myself [Humblebrag much? – ed.] secured a fastest team award for Team Brew/Drink/Run! I am so proud of all the BDR team members. You guys were all great!

All runners left with a nifty race medal, fashioned to also serve as a bottle opener, and the satisfaction of having run off a few calories before the festival had even started.

My only issue with the run was that I didn’t bring bug spray or sunblock. Everyone shared but at next year’s Savannah Craft Brew Race make sure you bring both. I know I will. 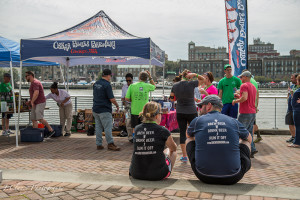 The Craft Brew Race beer festival was also well organized and fun. In fact it was one of the more fun beer festivals I’ve been to. The tickets were capped at 800 so the crowd was very manageable. Lines were short or non-existent and the brewery list was solid. Craft Brew Races tries to bring in as many local breweries as possible and with the recent explosion in Georgia breweries there was a nice list of tents I wanted to visit. A few national brands were mixed in too so there was plenty of good beer to be tasted.

I made the rounds making sure to stop in a support our local breweries Moon River, Service, Coastal and Southbound. None of the breweries brought anything super rare or special, it just wasn’t that type of festival, but it was good to see Service bring in their new, hyper local and super tasty Bier de Garde, Old Guard. I was able to taste from a few Atlanta breweries that have not made it down to Savannah yet and have a few favorites from the likes of Dogfish Head and Founders.

I’m looking forward to next year’s Craft Brew Race, taking another fastest team win and seeing what will be on tap. If you can’t make it to Savannah for next year’s event check around for another Craft Brew Race in your area. I have a feeling that there will be more popping up around the country. In the meantime listen to the Brew/Drink/Run interview with Matt Grey founder of Craft Brew Races and start training. 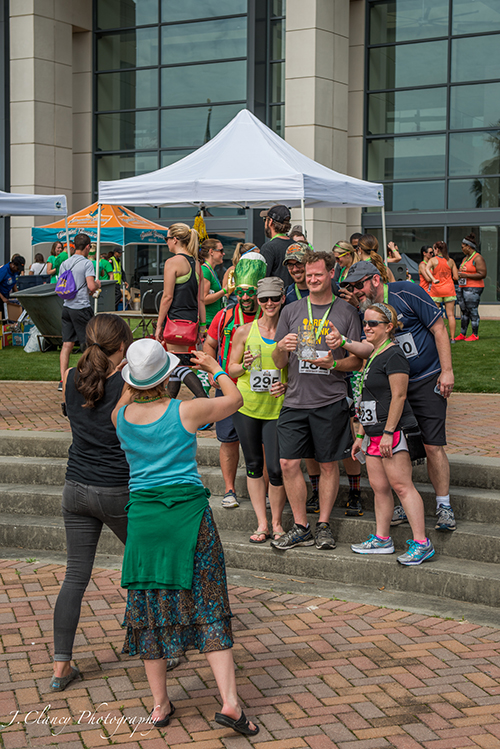