This looks a lot like regular Dragon’s Milk but with some red hues when held to the light. The fruit is obvious on the nose but not over the top big or too sweet. It has some light cherry mixing with the raspberry aroma, almost like a cough drop or red fruity candy. Bourbon barrel aroma is totally gone and I’m getting just the slightest hints of stout in my nose. The taste is also fruity, but not in your face or overly sweet. The taste is more distinctly raspberry than the aroma, with a little chocolate, vanilla, and thankfully a good bit of the awesome bourbon flavor that makes Dragon’s Milk so good.

Not seeing a lot of great reviews of this (and I also prefer the regular version) but I’m glad I tried this one as well. It’s really not too bad at all, might even pick up another bottle. 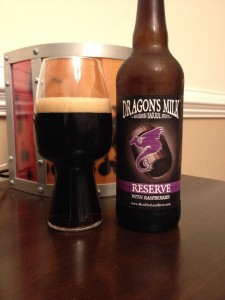