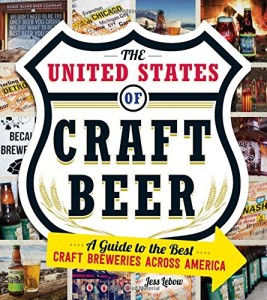 t first glance, The United States of Craft Beer is a pretty straightforward book. The book is divided into chapters by state (and Washington D.C.), each listing the best brewery in that state and one or two additional notable breweries. A nice idea and a usable reference book was my first thought. In fact, I used it as such a reference the first time I picked it up. I was planning a trip to Indiana and had a look to see what breweries would be worth looking into.

As I flipped through the book on that occasion and the next few times I picked it up, I realized The United States of Craft Beer was a much more complex book than I first thought. Yes, it is a good first reference book but it serves two other purposes as well.

This is a great book for a newcomer to craft beer, especially if they travel often. Not only does it list some fine breweries and their beers but, there are additional items that are of use for the newcomer. There is a solid and succinct Glossary at the end of the book that gives definitions of many beer styles and the elements that make up a beer. The author, Jess Lebow, is a home brewer and you can tell that he understands the steps and complexities of making a good beer. With this in mind, I can see The United States of Craft Beer being a nice addition to the library of a craft beer newcomer and a good reference guide. It’s an accessible book that could fill the gaps of a beer lover’s knowledge base and provides some good craft beer industry numbers you could use to impress your less knowledgeable friends.

I can also see this book being a nice addition to the more experienced craft beer drinker’s library. This is exactly the type of book I would put out on the table at a beer tasting just because I know it will raise the ire of someone’s beer sensibilities. As I delved into the book more I started to have serious reactions to the some of the choices in The United States of Craft Beer. In some cases I had to ask why someone would pick that brewery as the “best” in a state. I had to ask why some breweries were left out? Seriously how is Burnt Hickory NOT on a best of Georgia breweries list? Why some were included? Goose Island, are they even craft anymore? Some of the choices are solid and make a lot of sense but your average beer nerd is going to have strong opinions about what is best and worst in their state and beyond.

The United States of Craft Beer was written by Jess Lebo and published by Adams Media.