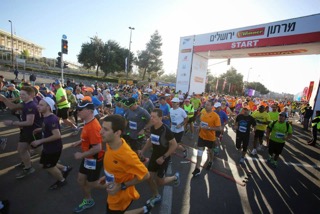 Marathon tourism offers the best of both worlds, the unique ability to travel the world while channeling a passion to run. One of the many great internationally acclaimed marathons is the Jerusalem Marathon, taking place this year on March 18, 2016.

“I loved the Jerusalem Marathon. It was a tough course but a beautiful tour of this great city.“

Almost a year ago, Brew / Drink / Run attended this amazing marathon. In honor of that experience, here’s a recap of the tourist sites and the course to entice anyone looking to participate.

Important note: Those running the Jerusalem Marathon, the goal isn’t a PR, it’s a challenging course, but one that is packed with thousands of years of history, enjoy the views, the vibe, and the inspirational surroundings.

The Course and The Sites

The Jerusalem Marathon route marathon route weaves through most of the city, enabling runners to truly experience a city with every footstep. 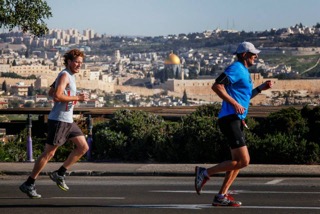 The starting line is in Sacher Park, which faces the Knesset, Israel’s Parliament. From there the full marathon course circles one of Hebrew University’s campuses, known for its premier technology, bio, and innovation. After enjoying a relatively flat course, runners go up Jabotinsky Street, past the President’s House, then on to Jaffa Road, passing the center of Jerusalem, and run along Jaffa Street, which is now the main thoroughfare for the city’s Light Rail train. Turning left past the city walls at Damascus Gate, runners enjoy a nice downhill towards the second Hebrew University campus, allowing them to see the panoramic views of the Dead Sea and the northern section of the Judean Desert. Once they’ve looped the campus, runners now are challenged to scale the mountain and run past through parts of the Old City with a nice downhill. Once out of the Old City, the incline back past the Valley of Gehenna and up towards the Jerusalem First Station- once the main train station of the city, now a cultural and culinary venue. So far, we’re about at kilometer 30. With just under a third left, runners now enjoy a panoramic view of The Haas Promenade, an overlook in the southern section of the city, allowing runners to snap a postcard-like shot of the Old City, the Dome of the Rock and the entire city. After this it’s virtually all downhill, except for Jerusalem’s version of ‘heartbreak hill,’ situated at about kilometer 39, a short but unforgiving hill that comes up at the wrong time of a good run :). Once that’s over, it’s smooth sailing for the last bit, bringing runners back to Sacher Park. 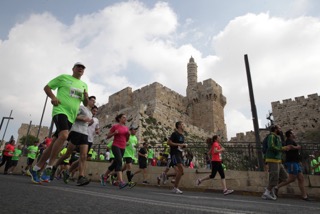 While the course is hilly, the crowd support along the route, the many stations of food, music, water, and kids smiling, definitely inspires and satiates anyone approaching a running wall.

The Jerusalem Marathon is definitely a must-do on any international running checklist. It’s inspiring. It’s impressive. It’s a challenge. Very few races leave an indelible mark on runners, Jerusalem is sure to be one of those.

So whether you’re looking for a great marathon, an inspiring course, or an excuse to join the other routes (half, 10km, or 5km) the marathon weekend leaves tourists with an infusion of history, appreciation for a city that is the nucleus of the world’s religions, and an amazing, unforgettable experience.

Want to know more about the Jerusalem Marathon? Here’s the official 2015 Jerusalem video.