In the far South, near the Panamanian border, the Tico culture and Rasta influences merge with expats from the United States, Canada and Europe to create a laid back paradise for those who love nature and community.

Right outside of Puerto Viejo is the black sand of Playa Negra and Kaya’s Place hotel. If heading south on Highway 256, you’ll be greeted with a sign proclaiming “Craft Beer on Tap,” a welcome and rare sight in a country dominated by bottles of mass marketed Imperial. For those heading north, an even friendlier omen can be seen: A giant billboard of a mug-hoisting three-fingered sloth. 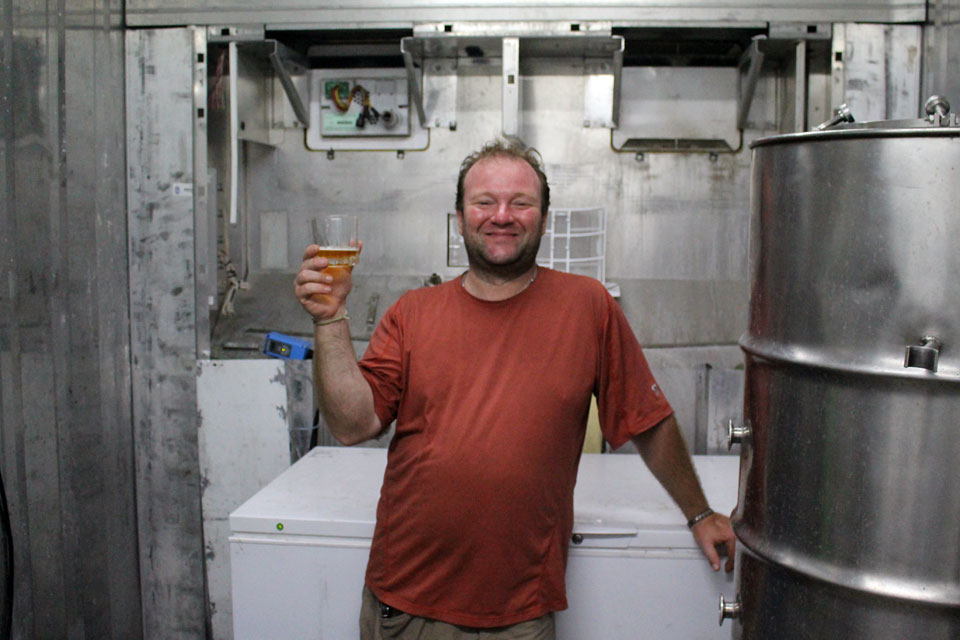 Kaya’s Place hotel is the home of BriBri Springs Brewery, which makes its beer on-site in an efficient, creatively repurposed shipping container behind the hotel. The owner, J.T. Ficociello, is a Vermont native who many – this author included – would say is living the good life.

“It’s a lot of work. It’s a crazy amount of work. But I love it,” J.T. explains. That work includes designing and building all of his brewing equipment locally in Costa Rica. Hops are smuggled in via checked baggage. Competing against the former beer monopoly controlled by Florida Bebidas is its own struggle. But J.T. revels in his favorite aspects of the job like utilizing his creativity and building a supportive community. And secretly, I think he enjoys the hardships for what they are: opportunities to prove your mettle. 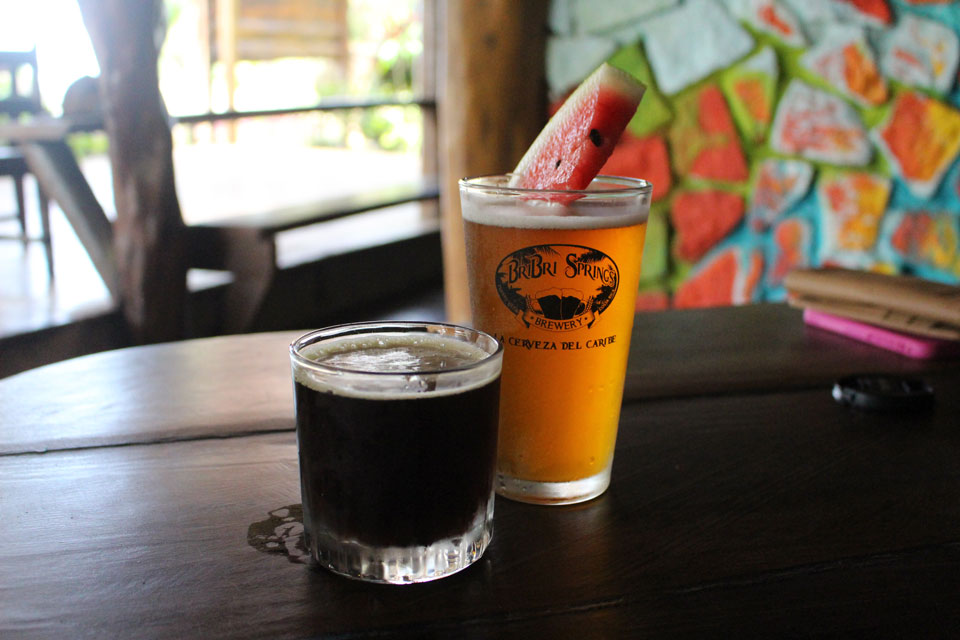 “Traveling always reinforced my love for Vermont. But Costa Rica was the first place I felt like I could share with Vermont,” says J.T.. “When I came to the Caribbean I found this beautiful place with locals living with foreigners. The more I came, the more I realized I wanted to be here.” A brewer since the age of 14, he left a comfortable life in the prosthetic limb industry to follow a dream. But instead of only adding to his own story, he is finding ways to make the story of Costa Rica’s southeastern coast a part of the narrative as well. 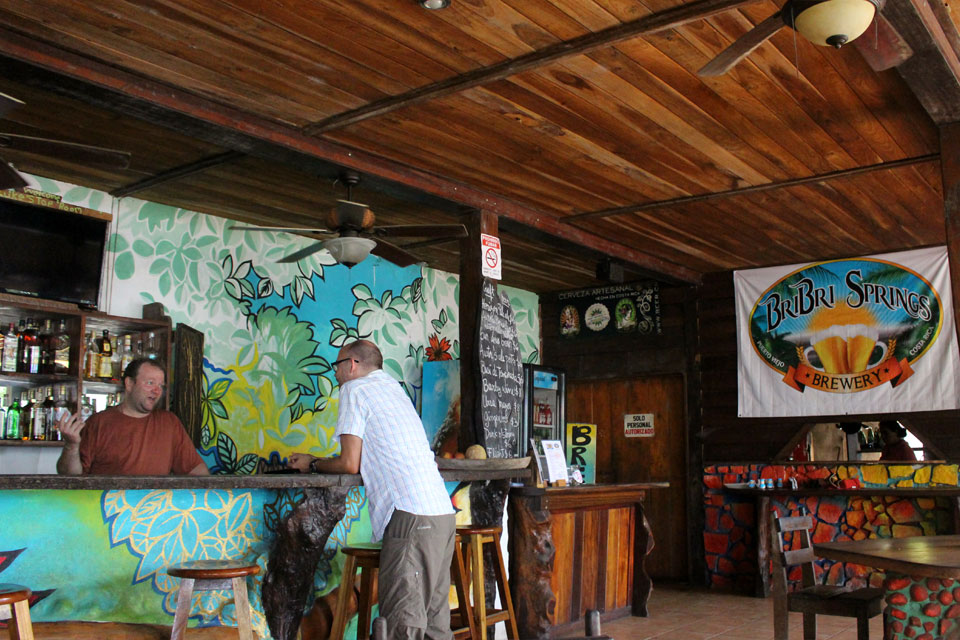 The bar at Kaya’s Place, home to BriBri Springs

BriBri Springs’ beers are hyper local, using ingredients and branding elements taken from right outside of the brewery doors. “I really am trying to tell the history of this place through what I’m brewing,” says J.T. Austen’s Ale, for example, is a porter named after a well-known coconut salesman and is created with local organic cacao. Basi is a unique beer/mead hybrid that uses Costa Rican mangoes, pineapple and raw cane sugar that reaches a lofty 14% ABV. The Caribe Barley Wine is similarly ABV-intense but is highly quaffable compared to its English and American counterparts. It’s a barley wine made for drinking, not sipping. “I like big beers, so I started with big beers,” J.T. confides. 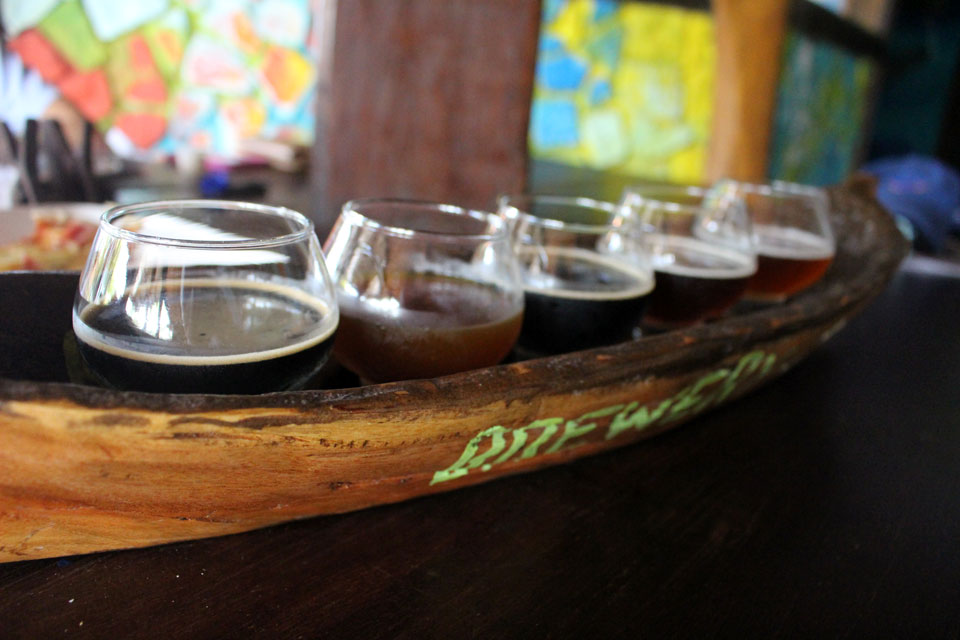 A canoe-style flight of beers at BriBri Springs

BriBri Springs is an inspiring story. Under J.T.’s leadership, it has created not only a full slate of delicious beers that any brewery would be proud to serve, but it is doing important work in expanding the craft beer culture in Costa Rica. “In the beginning, it was all expats. Now there are a lot of Costa Ricans that love beer and are a part of it,” says J.T.