I think I’m over it.

Don’t get me wrong, I’m am still a huge fan of craft beer. Trying new beers and enjoying the best of them is still a thrill for me. I am simply becoming aware that the endless hunt for whales and rare beer just doesn’t interest me like it once did. As Savannah Craft Beer Week is in full swing I have realized I’ll will be missing some of the biggest events for the first time in years. This is partially by choice, partially by family commitments that will take me out of town. This has really gotten me to thinking about my change in attitude towards acquiring rare craft beer, and what has caused those changes.

I used to have more disposable money. I took a big pay cut to work at Service Brewing Co. Although this was clearly the correct choice for me on a personal level, it means a lot less extra money for beer. Gone are the days of buying an extra bottle of harder to find beers for trades. Gone are the days of filling up my cart at the store with little regard for the cost of things. This stung a bit at first, but after a while it has become rather liberating. I still go to the beer store a lot more than the average craft beer drinker, it is just with tighter pursestrings and more focus. This makes it much easier for me to pass on harder to find beer I’ve tried before.

I’m just not the guy in the know anymore.

I used to be on top of every new release and rare beer delivery. I would literally be standing in the store when the trucks would arrive. Now when I go to the store I am often surprised (but grateful) when my “beer guys” ask me if I want a bottle of the limited beer they have on hold in the back. “When did that beer hit town?” I now ask. People used to look to me to find out when the good stuff was coming, but I’m just not the guy in the know anymore.

I used to spend endless hours on beeradvocate.com to find out what the best beers were. Then I’d spend endless hours creating lists of must try beers I could not live without. I’d do extensive research on what it would take to trade for those beers. Then become frustrated at the realization that I’d never have the ammunition to trade for a number of those beers. Eventually the thrill wore off. It became too stressful to worry if that box of irreplaceable beer would make it to “SudsMuffin” in one piece or not. Even if I have lost the taste for trading, I must admit I did have a good time doing it for a while. (Heck, I even have a series of posts about beer trading on this very site!) I did manage to get a hold of a lot of great beer I would not have probably tried otherwise, some of it is even still in my cellar. I have shared, and have had shared with me countless harder to find beers over the years thanks to beer trading. 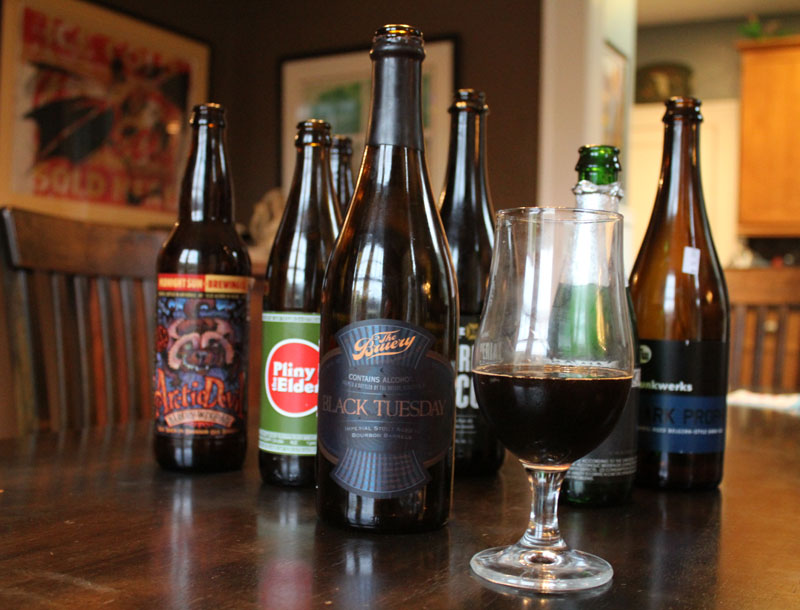 “Whatever dudes, more beer for me! Right?”

I used to feel like I must get a beer if it was considered rare or amazing. I can remember lurking on the those same beer forums of beeradvocate when I first really got into craft beer. There were always more than a few veteran advocates that would post about being over it. They would talk about how they will enjoy the endless amounts of fresh beer that is easy to find, rather than hunting down the next big thing. “Whatever dudes, more beer for me! Right?” “You are just sore because you’re not scoring the rare stuff anymore” “Why would I ever stop seeking out the rarest beer” … I get it now. I’m am just done running all over town week after week for hard to find beer. I like Tropicalia just as much as the next guy. I’m sure it will still be just as yummy when everyone decides they are done freaking out about it. Hopslam is one of my favorite beers. If I were to miss out on it next year I’d be fine with that. I’d love to try Duck, Duck Gooze. I think I’ll be happy enough to enjoy this Westbrook Gose instead of working out an impossible trade. I don’t want to jump through hoops to drink good beer anymore. If it is meant to be, it is meant to be. Hopefully I’ll get to have that beer someday.

I’m not trying to say that I’m no longer drinking rare beer. I think no less of those who continue to do these kinds of things. If you enjoy hunting down whales there is no reason to stop. I’ll still be looking for the best beer at the shop when I travel. I’ll still be scanning the draft list for the best beer at the bar. I’ll still get giddy at the chance to be at a good bottle share. I’ll still be making some trips to the store for recent new arrivals and for once a year offerings like Mexican Cake, KBS and Hopslam. The importance of getting a hold of these beers just isn’t nearly as great to me anymore, and it is kind of a relief.