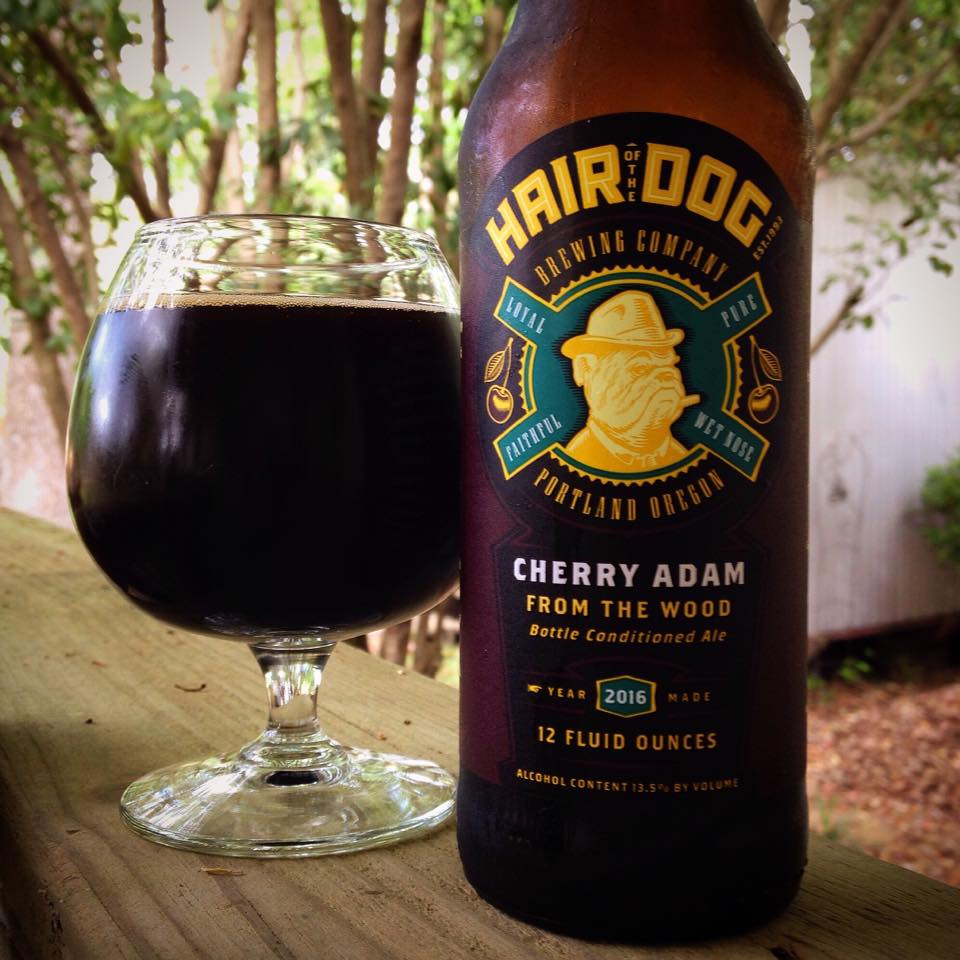 Hair Of The Dog – Cherry Adam From The Wood

This bottle was sent to me by my friend, and former Hair Of The Dog (HOTD) head brewer Denver Bon. He has since brewed his last batch for HOTD, but I’m still excited to try this well regarded beer for the first time. Cherry Adam from the Wood is currently rated 95/100 on BeerAdvocate, and has a perfect 100 over at RateBeer. Not too shabby. This review will be for the 2016 vintage of the beer.

Cherry Adam from the Wood is a bottle conditioned Old Ale, with this vintage coming in at 13.5% ABV. According to the label the beer is “Made with organic pilsner, a variety of specialty malts and Northwest grown whole hop flowers. Aged with locally grown cherries in oak barrels for at least 15 months.”

The beer pours from the 12 ounce bottle with a dark brown color that has some burgundy highlights at closer inspection. A little light dares to penetrate through the liquid as the glass slowly empties revealing a cola caramel color through the light. As with most HOTD beers I’ve previously had the 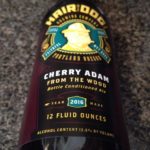 beer pours without much of a head, but the slight tan ring that does form around the glass has just the smallest bit of a cherry red hue to it.

The beer is pretty clean on the initial pour, the second pour does create some fine yeast particles floating in the beer. Not too surprising from a bottle conditioned beer. It would be easy to mistake this as a stout of some sort, but it does fit nicely into it’s style guidelines. There is little variation in HOTD label art from beer to beer. The bulldog is occasionally wearing a different hat and each beer seems to have it’s own unique color combo. That consistent design will make their products easy to find in the market.

I’m getting a rich tapestry of aromas on the nose. Layers of alcohol soaked cherries, dry oak, leather, tobacco, rum raisins, a little brown sugar and a little bit of sarsaparilla. Although the cherries and oak dominate overall, the other more subtle notes jump to the forefront from time to time. The aroma on Cherry Adam from the Wood is sweet, decadent and inviting. I’ve said it before, but this is the kind of beer I could just sit and smell for hours.

Ooooooh Lordy this is one massive brew! The taste does follow along with the aroma rather well. This could have been a total sugar bomb but the oak and dry leathery flavors mix immediately with the overall sweetness of the beer. This creates a near perfect balance that lasts throughout each sip, never quite too sweet or dry. The cherries save their entrance until about half-way through the taste, adding an additional sweetness and just a slight bit of tart to the palate. There beer showcases a hint of vanilla and maybe just the slightest hit of roasted nuts hiding in the background as well.

As the beer warms that perfect combo of caramel and chocolate joins the flavor party. An underlying smokiness is in the taste as well. I got that smoke when I enjoyed regular ol’ Adam, less so with Adam from the Wood, and now it is back again on Cherry Adam from the Wood. The 13.5 % ABV is not exactly well hidden, but I’m not sure I’d really want it to be in this kind of beer. It warmed/burned a bit at first, but as I’ve adjusted a bit to the taste and heat from the alcohol it’s become a welcome component to the flavor.

Carbonation is not in abundance with this one, but it is quite a bit higher than some of the longer aged beers I’ve had from HOTD. I’d call this one slick, slightly oily, with a medium bodied mouth-feel overall. There is just enough carbonation to keep this from feeling syrupy.

This is the kind of beer that stays on your mind long after you drink it. Unless you really dislike big boozy sippers, Cherry Adam from the Wood should be on your must try list. This is a beer that could certainly be aged. In fact, HOTD is one of the few breweries that actively promotes cellaring their beers. Assuming this 2016 bottle is somewhere between 6 and 12 months, it is drinking mighty fine right now. This beer seems to be released annually and is available at the HOTD taproom and in portions of their distribution footprint. That footprint isn’t huge, so I would say it’s probably moderately hard to get a hold of. It seems like it’s a beer that can be traded for, and many HOTD beers are also available for purchase online. Limited release beers like this one tend to sell out pretty fast, so I’d be quick on the draw if you see it.

Tags: Hair of the DogOld Ale