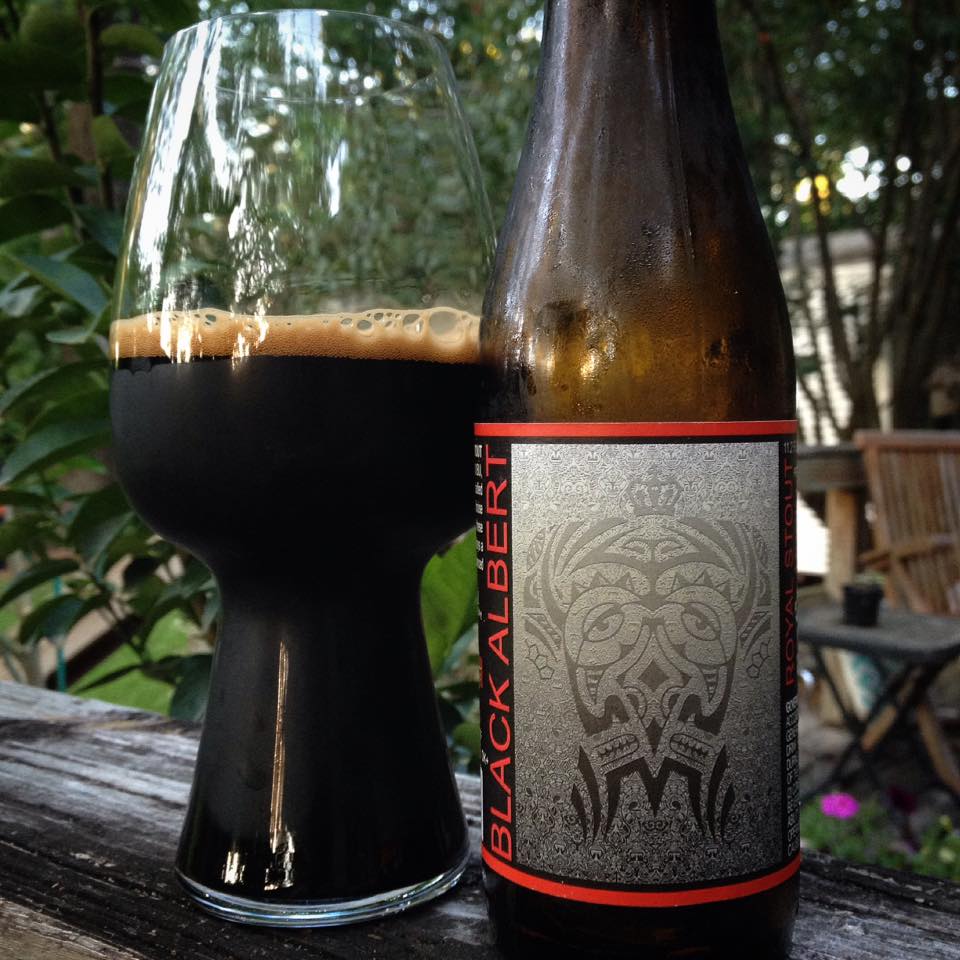 De Struise Brouwers originally brewed Black Albert exclusively for Ebenezer’s Pub in Lovell, Maine. Way back in 2007, this beer was made for Ebenezer’s 3rd annual Belgian Beer Festival. Ten years later it is still a classic Belgian take on a Russian imperial stout. Its popularity quickly created the demand for more Black Albert, and it eventually has found its way into bottles and onto tap lines across the globe.

I seem to remember trading for my first bottle of Black Albert, but I honestly can’t remember exactly where I picked up this bottle. My best guess is that I found it on my last trip to Florida in late 2016.

De Struise Brouwers Black Albert was brewed to honor King Albert II, the sixth king of the Belgians. The label refers to the beer as “Belgian Royal Stout”, which would lead me to believe this RIS was probably fermented with a Belgian yeast strain as opposed to a more traditional English yeast. The beer clocks in at a massive 13% ABV, perfect for sharing or a slow sipping night cap.

The label has the following info on it: Lot 171004042013-B-C-D – Bottle Lot 30-06-HH. I was unable to find any concrete information about the label’s bottle date. If I am to trust the answers I found on a few beer forum threads, this beer appears to have been bottled in April of 2013. I’m not sure how a 2013 bottle of Black Albert survived that long on the shelf, but it looks like I found myself some pre-aged brew!

If I’m being honest, as beer labels go this one is not my favorite. I remember opening that trade box years ago and feeling a bit let down by the bottle itself. It has an odd combination tribal tattoo art and boring fonts. I would not be surprised if that tribal like design is in some way correlated to King Albert II, or maybe someone at the brewery was just really into tribal tattoos at the time! As they say, it’s what’s on the inside that counts. What is on the inside of this bottle is much more impressive than its artwork would indicate.

Black Albert is about as dark as you would expect a Russian imperial stout to be. I cannot see any light coming though the black liquid. The cap came off the 11.2oz bottle with a mild pop, so I was not surprised by the minimal amount of head that was produced by my moderately aggressive pour. Given the sound of the cap’s removal, I was content with the small layer of dark tan head that formed on top of the beer itself. That head never settles all the way out and leaves a thin layer behind.

At this point in its life this bottle of Black Albert has a wonderfully blended aroma. The dominate feature hitting my nose is a combination of sweet cocoa and black strap molasses. The black licorice you would expect from the style is so mild it could easily be missed, and it took me a few minutes to get my nose to finally pick up on it. Underneath the bigger aromas is a some sweet cola, charred malt, and a hint of carob.

Although I tend to expect some more intense alcohol and licorice notes from a Russian imperial stout, I have to say that I really love the aroma of this beer. The milder and more blended notes work for me.

There is a similar theme to the taste of this beer as there is to the aroma. As Russian imperial stouts go, this 2013 Black Albert is more on the mild side of intensity… but not flavor!

Sweet layers of dark fruit, chocolate, ripe black cherries, and maple syrup lead off the taste. The more sugary elements of the flavor are somewhat balanced by a mild roasted malt, and some bitter carob that comes in on the back end. The typical alcohol heat/flavor this kind of beer is known for is nowhere to be found.

The finish and aftertaste brings a sweet/sulfur/salty molasses flavor that has a touch of Doppelbock like soy sauce. I am missing that distinct licorice flavor you expect from the style, but this unique molasses note on the finish makes up for it.

This beer is without a doubt a bit under carbonated at this point. That would be something I might complain about nine times out of ten, but in this case it is absolutely perfect. Who needs all those bubbles getting in the way of all this silky sweet goodness? They should have used a Vegas era Elvis on the label, because this beer is pure velvet!

It is no fluke that Black Albert has maintained a perfect 100 rating on the most popular beer rating websites. This is a quintessential Russian imperial stout and should be enjoyed at least once by anyone who considers themselves a fan of beer. I would certainly miss all the others, but if you told me I could only drink this one stout for the rest of my life, I’d be cool with that.

Thanks to Shelton Brothers importers Black Albert is no longer a whale that is demanding too much in return in the trading world. It might not be available in every local bottle shop, but it is a beer you will be able to find from time to time. Shelton Bothers imports are distributed in 29 states, well as Puerto Rico and the US Virgin Islands. Visit their website to see if your state is among them. If not, it should be rather easy to trade for these days, or stock up on a few bottles when you can. Seek and enjoy!