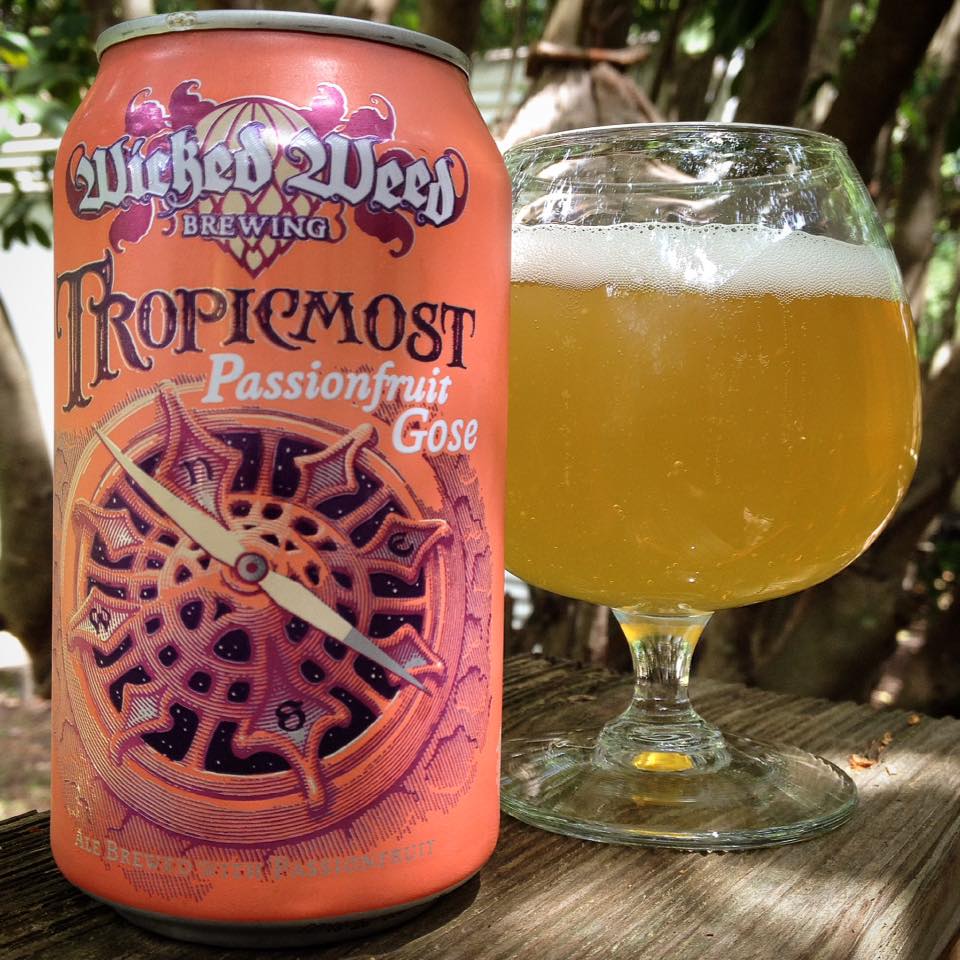 Long before Wicked Weed Brewing hit the scene in 2012, Asheville, NC was already regarded as one of the cities at the forefront of the craft beer boom. The addition of Wicked Weed did help cement the city as one of the best beer destinations in the United States. With seemingly little effort they fluctuate between styles of all kinds; IPAs, imperial stouts, barrel aged beers and Belgian inspired ales are just a few of the things they brew exceptionally well. What they are most know for, however, are their sour ales. The fever of the craft beer community for those sours has lead to the creation of a second facility in Asheville called the Funkatorium. Tropicmost Passionfruit Gose currently has an overall rating of 89/100 on RateBeer and a slightly lower 86/100 on BeerAdvocate.

Wicked Weed Brewing Tropicmost Passionfruit Gose is brewed with passion fruit and salt, hopped with Saaz and Warrior hops, and fermented with California Ale yeast. The beer clocks in at a modest 4.1% ABV. From the side of the can and website, “For us, this Old World-inspired beer is mile zero–the point at which we trustfully spin the needle on the compass and follow at will. From the warmer climates of equatorial lands, this Gose takes its tropic inspiration. Brewed with tart passion fruit and flavor-brightening sea salt, Tropicmost Gose is a roadmap of the Southern Americas. Cheers to moving until direction is found.”

The beer was canned on 02/14/17 and opened on 04/22/17 . I have to say this is a bit of a surprising style to be released as a late Winter seasonal, but a here in the south the weather has turned well warm enough for this to be effective as a refreshing session ale.

If you are familiar with Wicked Weed and their artwork this can art falls right in line with what they often do. The art of the compass itself kind of reminds me of something you might find on a young adult fantasy novel. The most striking thing about the can is really the color itself. I can’t ever remember seeing a salmon pink beer can before!

Tropicmost pours from the can with a moderately cloudy lemon yellow color. It is quite common to have little to no head at all on this style of beer, but this Gose actually retained it’s white foam for a while. At least long enough for me to get a picture of it! The head does finally settle to a slight half ring on the beer, but again that seems pretty impressive given the style. (I’ve heard somewhere that the salt affects the head retention, but I’m not sure if that is actually true or not)

It is easy to say that the passionfruit dominates the aroma, and that is true to some extent. Immediately the sugar sweet and tart tropical fruit hits my nose. There are some more subtle things going on as well though. After a few whiffs some notes of white grape, yellow grapefruit, soft wheat and sweet lemon peel all find their way into the equation.

Tropicmost is not particularly tart or salty on the nose, but that is not an indication of where the taste will lead us.

Well if you are looking for a good bit of salinity in your Gose this will get the job done. An initial rush of saltiness hits my palate right away, and in all honesty lingers on through all the way through to the aftertaste. Even with such a strong salt component, this beer has an incredible amount of balance.

Much like in the aroma, the sweet yet tart tropical fruit flavors of the passion fruit tends to dominate the fruitier side of the beer. More subtle notes of kiwi, canary melon, and sweet lemon candy are also present taste. A good balance of sweet and salty is making this a beer that is pretty easy to sip rather quickly.

I can’t say that the carbonation level of this is bad, but I do kind of wish it was it was a little higher. There is something a touch syrupy about the beer where it stands now. That isn’t an overly big problem given the sweet fruit flavors that make up such a large part of the flavor profile.

Although usually a relatively simple sour ale, the Gose can vary quite a bit from beer to beer. Sometimes heavy on the salt and tart, sometimes more tart and sweet, etc. Tropicmost really hits on a great balance of sweet and salty. There is a bit of tartness involved in the beer as well, but it is definitely a more subtle element of the beer for my taste buds.

I picked up a single can of this on a visit to Athens, GA, so that probably means this was pretty widely available inside of the Wicked Weed distribution network. I’d have to imagine there are still a few cans floating around in stores at this point. For those outside that network, I’d say this more of a generous trade extra rather than a trade centerpiece. If you’re a huge fan of passion fruit, a delicious Gose, or Wicked Weed in general it will be worth more effort to acquire.