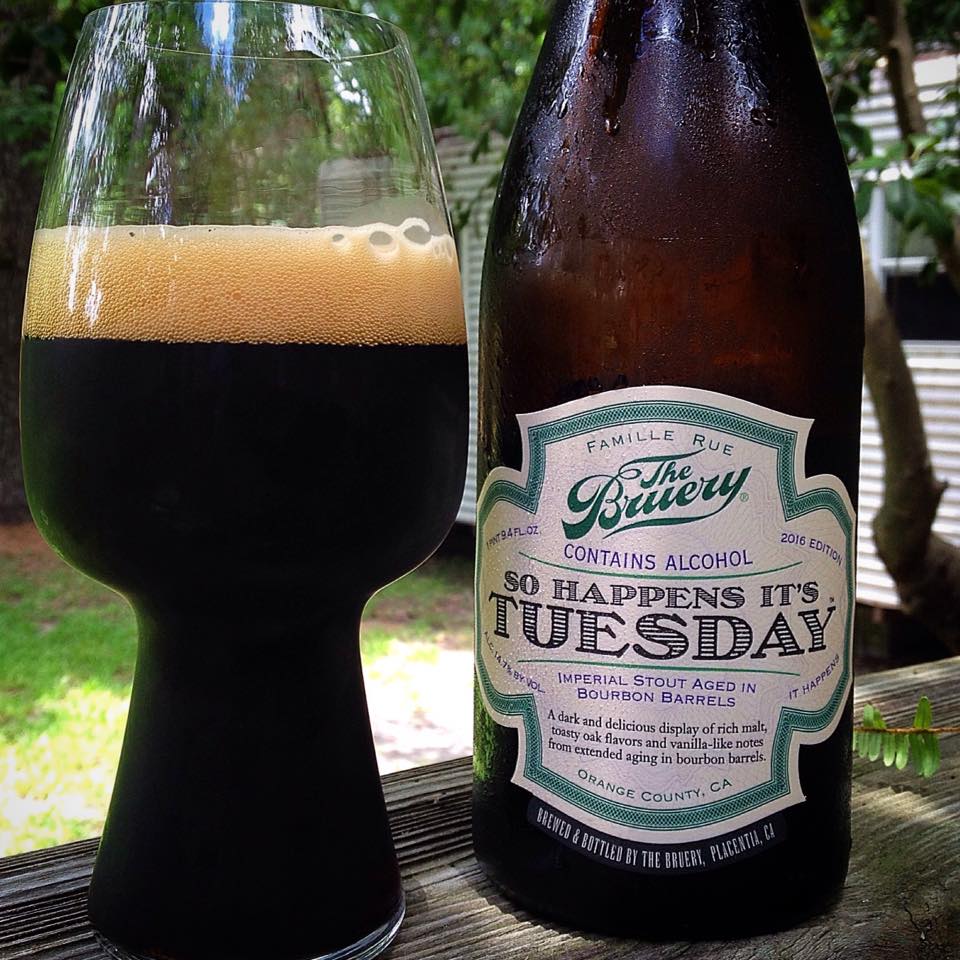 The Bruery – So Happens It’s Tuesday

I usually use this intro paragraph to give a quick bit of background information on the brewery of the beer I’m reviewing. However, I seriously doubt that anyone reading this needs an introduction to The Bruery. This southern California institution has been cranking out some of the best American craft beer since 2008. I’ve had 33 beers from The Bruery, out of the 33 only 7 have gotten a personal rating lower than an “A”. Those 7 all have a solid “B+”. I always have high expectations, and The Bruery delivers.

The Bruery So Happens It’s Tuesday (as much as I don’t want to write the full name of this beer over and over, I’ll skip the acronym this time!) is an American Double/Imperial Stout aged in bourbon barrels. The beer clocks in at 14.7% ABV and is considered to be the “more reasonable” little brother of Black Tuesday, which is another barrel aged imperial stout that hovers around 19% ABV. From the bottle and website, “Our infamous Black Tuesday® stout is named in honor of the great stock market crash of 1929. So Happens It’s Tuesday is similarly dark and delicious, but in a more affable format, reminding us that there is always a bit of good to be found within the bad. Things happen, life goes on. This beer can be enjoyed in all of those moments and seasons.”

The label is typical in shape and style for The Bruery. Much like most of their labels there is no specific artwork, but it relies on design and font to get the point across. All of the information that you need is located exactly where you would expect it to be on a label from The Bruery. The clever take on this label is the background and script resembles American currency. It’s perfect.

The beer itself has a color that I would call a dark cola. Seemingly black at first glance, but there is some definite caramel color at the bottom of the glass and near the head. The head has a pleasant light tan color, borderline off white. It doesn’t have the dense thickness I like to see in a massive Imperial Stout, and it fades down to a wafer thin layer on top of the beer after a minute or so.  So Happens It’s Tuesday does leave some impressive lacing behind.

I’m trying not to compare… but I’m not quite getting the rich complexity that you do on the aroma of Black Tuesday. So Happens It’s Tuesday is a potent and intense smelling stout, but it seems to lack some subtlety. Bold bourbon, sweet chocolate, caramel, vanilla and molasses assault my nose with each sniff.

As the beer warms up towards room temperature a distinct chocolate covered cherry aroma becomes evident, which is a welcome addition. There is nothing inherently bad about the aroma of this beer, but apart from this new cherry note it’s all just cranked up full blast.

The taste of So Happens It’s Tuesday has a much more layered and complex flavor than the aroma. Sweet caramel, vanilla and bourbon lead off the taste and linger on through to the finish and aftertaste. The big malt base has a slightly roasted character, which is a perfect compliment to the big sweet flavors that are ever present. I am shocked to say that I’m surprised this beer is 14.7% ABV. The flavor of the bourbon is strong, but there is a stunningly small amount of alcohol taste to the beer in general. Even if this is a bit too easy to drink, you can certainly feel the alcohol as it warms you with each sip.

Temperature is playing a huge roll in the overall flavor of this beer. As the beer warms up that sweet caramel that shot out of the gate morphs into more of a molasses flavor. A distinct fig flavor starts to come out after it warms as well, only adding to the complexity of the flavor profile. It is common to find some serious dark fruits in a big imperial stout like this, but what I am tasting is not generic in anyway, those are figs.

I would have to say this massive imperial stout has what I’d call a medium body. Not thick, but not thin either. This is a huge surprise to me. Although I am trying to not compare this too much to it’s big brother, I can’t help but think about the big thick mouth-feel of Black Tuesday. This beer actually does feel thin in comparison to other big imperial stouts with a similar ABV.

The feel of this beer is not make or break for me, but I do feel like I would enjoy it more than if it was a good bit fuller in body.

I really wanted to review this without the influence of Black Tuesday, which was probably the best beer drinking experience of my life. Ultimately it was impossible for me to not compare the two. The fact of the matter is that this is not the beer Black Tuesday is. It was never fair for me to assume it would be. So Happens It’s Tuesday has less complexity in comparison, but it is actually more of a true stout, much less of the big dark fruit flavors you get in Black Tuesday. The bottom line: So Happens It’s Tuesday is an excellent bourbon barrel aged stout in it’s own right, and if I’d never had Black Tuesday it would seem more impressive.

I don’t remember the price, but I do know this was an extremely expensive bottle of beer. I’ll assume this will come out again sometime in the future, but if you are looking to trade for a bottle of this vintage, beware. There have been several reports of bottles with an infection that imparts a sour cherry flavor.