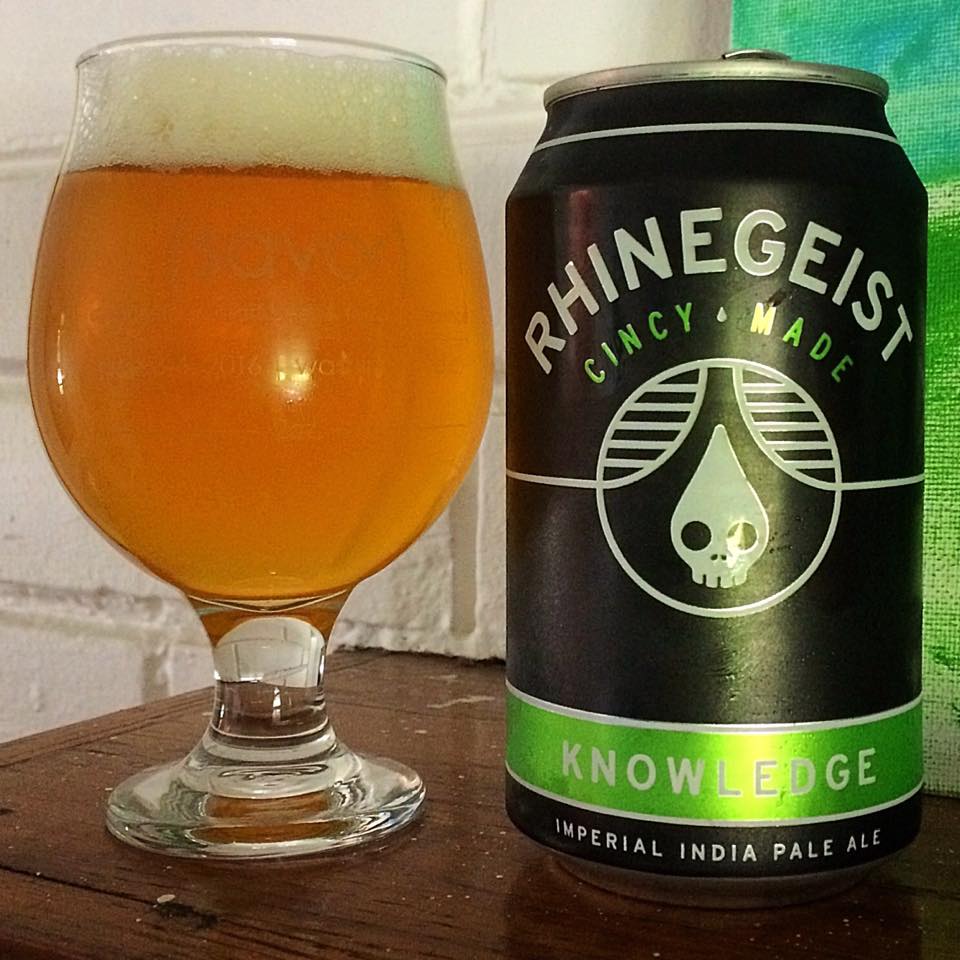 Rhinegeist has been brewing beer in Cincinnati, OH since June of 2013. In just three short years their production has swelled from 2,000 barrels in that first year to more than 50,000 in 2016. It is hard to argue with that kind of growth! Big thanks to Lee for the beer.

Rhinegeist Knowledge is an American Double/Imperial IPA that comes in at 8.5% ABV. Brewed with Simcoe, Centennial, Chinook, Columbus hops, this massive brew is available year round in cans and on draft. It looks like there is a packaging date printed on the bottom of the can. It is just a bit off center, but I’m fairly confident the date is 05/09/17, making this beer two months old at the time of review.

Although I have some very limited experience with Rhinegeist (I think this is only the second beer I’ve tried so far) I do really love the design of their cans. Each can is laid out almost exactly the same. Each beer obviously has its own name, and also has its own unique color scheme as well. This might make it a bit harder for an occasional consumer like me to remember one beer from another, but I’m sure it works well on a local level. Knowledge has a sexy all black matte background with a pop of green in the lower banner and some of the lettering. It’s a sharp looking can.

Knowledge pours with a pretty golden yellow color that has some lovely orange highlights. The beer starts its life in my glass with a big off white head. The head slowly fades down to a faint layer in the center of the beer and a thicker ring around the edges. Nice and clear on the initial pour, a touch more haze when I added the remaining beer from the can later. It is hard for me to imagine what more you might need when it comes to the appearance of an imperial IPA.

This is right up my alley when it comes to aroma for the style. I get some big tropical fruit notes of sweet pineapple, tart passion fruit and juicy mango. Knowledge knows its roots however, and underneath the sweeter fruit notes is some mild pine and earthy spice. That spice has an interesting mild cinnamon kind of thing going on. Unexpected, but I like it! A nice dense biscuit malt serves as the underlying bass line in the aroma and helps to tie it all together. As the beer warms up to near room temperature a little of the 8.5% ABV starts to come out a bit on the nose as well.

There are certainly more potent and intense smelling imperial IPA’s on the market, but overall I am impressed by what Knowledge offers. The different notes all play well together giving the beer a coherent aroma.

The aroma ties right into the taste. Sweet tropical fruit flavors of orange, guava, passion fruit, and some bitter grapefruit lead off the taste. I’m finding the pine quite a bit stronger in the flavor than I did in the aroma. That additional pine is extremely welcome as it cuts some of the big sweetness the beer offers. The pine unfolds into a more spicy/earthy hop flavor, and a slightly dry cracker malt becomes evident on the backend of the taste as well. Both of these flavors work with the pine to help create some balance. There is just a sliver of alcohol taste that slowly increases as the beer warms.

Knowledge brings an excellent collection of classic imperial IPA flavor with an appropriate amount of bitterness.

This beer has a relatively light mouth-feel with some nice bright carbonation for the style. The tingle of CO2 carries the bold hop flavors, coating the tongue and leaving a mild hoppy buzz with each sip. This creates an imperial IPA that is maybe a bit too easy to drink, but it works with the flavor profile exceptionally well.

Sometimes a big beer like this can suffer from a syrupy mouth-feel that is just a bit too chewy. Knowledge does a great job of avoiding that potential pitfall, I’m digging the feel of this beer quite a bit.

Even if Knowledge isn’t on the current beer nerd “freak out and seek out” list, this isn’t a beer that you should sleep on if you come across it. The beer has a classic mix of sweet fruit, pine, malt and bitterness.

If you live in the Rhinegeist distribution area I’d suggest giving Knowledge a try. It is well worth it if you are a fan of a solid imperial IPA. For everyone else, I can’t say this is the kind of beer that should be the center piece of a big trade, more a “locals for locals” kind of beer. If I was a Cincy trader I’d be dropping these as extras in some boxes as well, nothing like showing off your local brews!