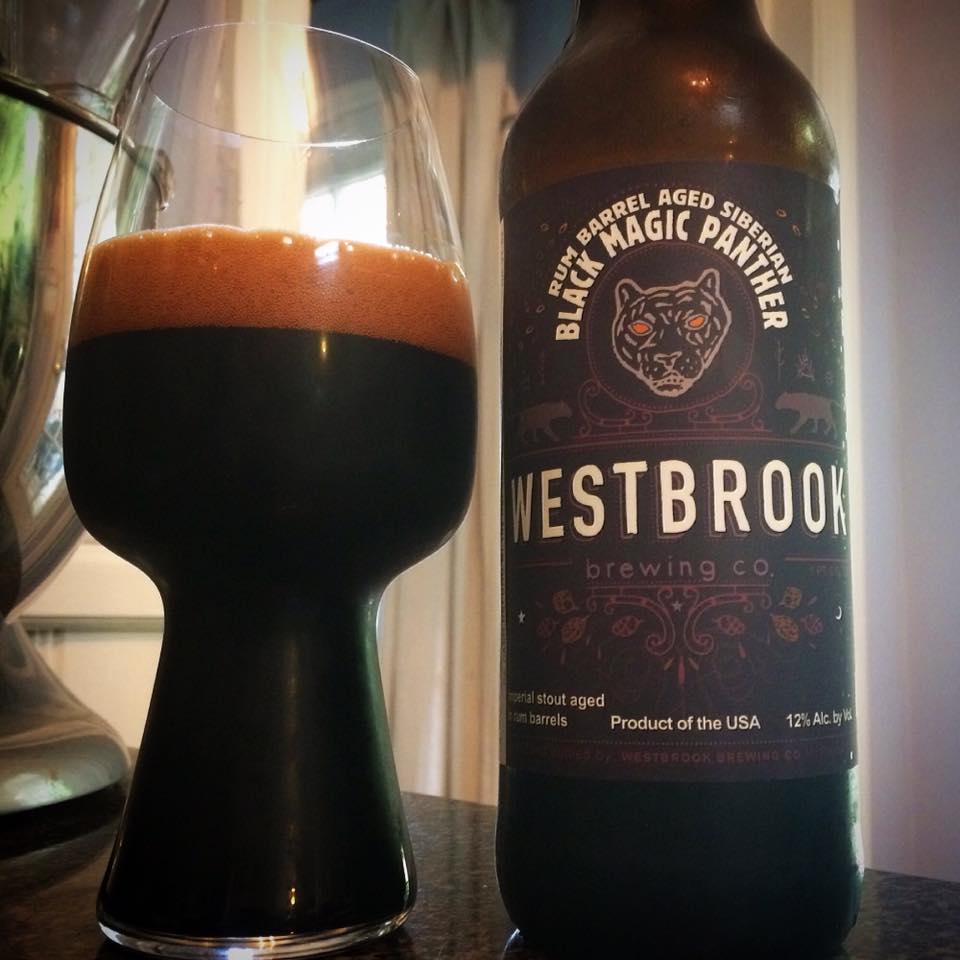 It did not take long for Westbrook Brewing Co. to become one of the darlings of the craft beer universe. The brewery opened in early 2011 in Mt. Pleasant, SC, located just northeast of the more recognizable city of Charleston. Westbrook immediately began providing the Charleston and low country area with amazing and creative beers. The “secret” was short lived, and thanks to beers like Mexican Cake and the intense Gose the beer drinking and trading community has been a buzz since.

I found this bottle in one of my favorite local bottle shops a few months ago. I snatched up this barrel-aged variant that was sitting next to the regular version of this beer, assuming that I’d had the regular one before. It turns out that I’ve tried the apple brandy and bourbon barrel-aged versions, but not the regular one! Oh, well. Something to look forward to I guess.

Westbrook Brewing Co. Rum Barrel-Aged Siberian Black Magic Panther (Rum Barrel SBMP) is a 12% ABV American double/imperial stout that is brewed with “mountains of roasted malts and dark candi sugar”. The beer was then aged in Nicaraguan Flor de Caña rum barrels for about 12 months. This beer was bottled on 12/30/16, and was released on 01/05/17.

There is a constant design theme to Westbrook artwork, no label strays too far from the typical layout. The beauty is always in the details of each illustration used. Every label has very small but distinct details that correlates to the beer. It could be numerous small drawings of the specific ingredients used in the beer, or more obvious images like the panthers added to this label.

Rum-Barrel SBMP pours with a pure black color and creates a rich dark head on the beer. The nice two finger head settles down to unbroken layer of foam in about a minute or so. Not a ton to really say about a stout this dark and opaque, but that doesn’t stop this from being a great looking beer.

My nose is immediately greeted with a combination of rum soaked dark fruit and slightly nutty roasted malts. A nice bit of dark chocolate fudge joins the aroma fray quickly there after. Extremely subtle notes of vanilla come and go and take a good bit of effort to smell. I do get a bit of a sour note in this as well. It’s like tart black cherry, or something along those lines. It is a fairly pleasant addition, but it doesn’t seem totally in tune with the other elements of the aroma.

Rum-Barrel SBMP is potent on the nose. Sugary sweet with a nod to it’s 12% ABV. Maybe not as complex as some other big barrel-aged stouts that I’ve had, but this is a great smelling beer overall.

The flavor profile leads off with a good bit of expected sweetness. I’ll presume it’s a combination of the wort/additional candi sugar that was not consumed by the yeast, and the rum barrel aging. I find that rum barrel-aged beers tend to be a bit on the sweeter side, at least as compared to a more common bourbon barrel treatment. That rum, and its sweetness, is evident as soon as Rum Barrel SBMP hits the palate. The alcohol heat certainly could have been higher, but it is actually fairly subdued. Just a hint of heat and alcohol taste comes through for me.

The second half of the flavor journey takes a more roasted and slightly bitter turn. The dark malts join forces with a bitting dose of bitter chocolate and just a bit of hops to expertly balance this big sweet sipper. I was a bit surprised to still get the hops seven months after bottling, and I have to wonder if they were considerably stronger when this beer was first released. Once again there’s that slightly tart thing going on. I can’t decide if it is an intended element of the beer, or something that was picked up in the barrel and has developed in the bottled. Like with the aroma, I don’t find it offensive at all, it just seems a little out of place.

The feel of Rum Barrel SBMP is quite simply perfect! Slick and oily without being too thick or chewy; this beer coats the mouth helping to deliver the massive flavor to the taste buds. I love the carbonation as well. Although not too bubbly, I get a slight lingering buzz on the tongue after each sip.

I believe this is the third barrel-aged version of this beer to be released, and I’ve been lucky enough to try them all! I would have to say that all have been excellent. (With the apple-brandy aged version being fabulous!) I did not have this fresh, but I am thoroughly enjoying Rum Barrel SBMP after seven months of aging. If I’m being extra critical I’d have to say this probably isn’t as complex as I’d like a “special” beer like this to be… but the truth is that this is delicious and I’m damn glad I picked up a bottle when I saw it. I’ll give this a tentative seek and enjoy!

At $20 a pop at the brewery release (I can’t remember how much I paid at the store), this is not a cheap bottle of beer. All of the info I’ve found on this beer indicates it was distributed in very limited amounts. If you look to trade for a bottle of this I would expect have to give up something as limited in return, not sure a general $ for $ situation will get it done.