Intuition Ale Works is located in the King Street area of Jacksonville, which is quickly becoming known as Jacksonville’s beer corridor. The area is also home to Bold City Brewery, craft beer store Beer30 and Kickbacks Gastropub. Intuition was founded by Ben Davis, a Jacksonville native, who moved from the wine-making business into the beer business. Intuition Ale Works has a wide-ranging line up of beers. Some of these, like People’s Pale Ale and Jon Boat are staples of the list, others, like the Siren show Intuition’s experimental side.

I took one of the daily tours of the brewery. The tour starts in Intuition’s tap room with a pint for the walk. I chose the Shotgun Shack Black Rye, a nice malty rye with a chocolaty nose and flavor, that didn’t make it through the whole tour. After picking up our drinks the large tour of thirteen made its way to the brewery. The tour was led by Lindsay, who told us that Intuition Ale Works opened its doors in 2010 and has been growing steadily since then. The brewery produces about 7000 kegs a year, almost triple what it produced in 2010. There have been recent discussions on expanding the brewery, with the possibility of a move to a larger space to accommodate a brewpub as well as more brewing room. I also learned that Intuition is big on supporting running in Jacksonville giving a free pint to everyone who participates in the Jacksonville River Run, the largest 15K in the country. 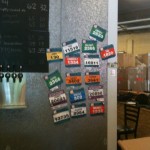 The tour included the usual talk about the brewing process and the production of beers on a large scale. A highlight of the tour was being able to open up a newly delivered whiskey barrel intended for an aged stout for the winter. We also had a look at Intuition’s small but new and exciting canning machine intended to speed up their canning process and expand their market.

The Intuition Ale Works taproom is open Tuesday to Friday from 3:00pm to 11:00pm and Saturday from 1:00pm to 11:00pm. Tours are given Tuesday thru Friday at 3:00, reservations are recommended. Tours are $5.00 and include the tour that first pint of beer and a souvenir pint glass. 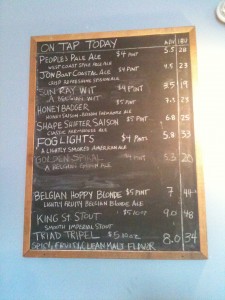